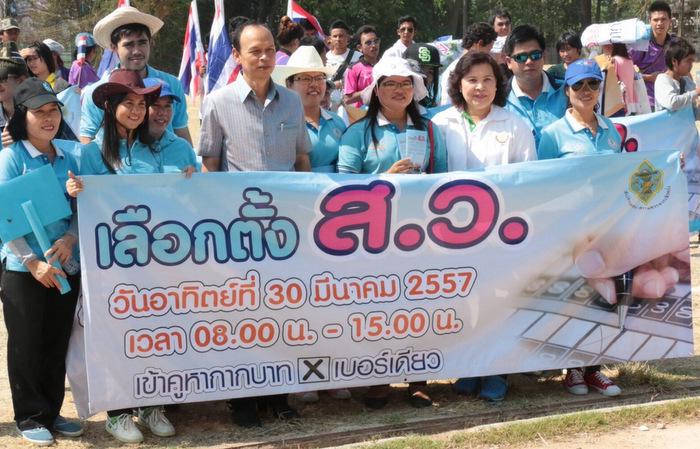 PHUKET: About 100 officials led by Phuket Vice Governor Somkiet Sangkaosuttirak gathered yesterday to call on the people of Phuket to vote in the nationwide Senate election on Sunday.

Speaking at Sanam Chai, the field in front of Provincial Hall that is occupied by anti-government protesters every night, Vice Governor Somkiet reminded passers-by that the polls will be open across Thailand from 8am to 3pm.

“Thailand is a democracy, elections are important – and we have been assured no polling stations will be blocked by protesters,” he said, affirming the promise by Phuket protest co-ordinator Amnuay Kumban on Thursday (story here).

“Senators are not permitted to be members of any political party, which means they are not involved with any government,” V/Gov Somkiet explained.

In one of the most healthily contested seats in Phuket voting history, the 2014 poll for a Phuket senator has drawn no less than eight candidates, with one hopeful being rejected for being a member of a political party as recently as last year (story here).

Mr Somkiet also issued a reminder that a ban on the sale of alcohol will be in place tonight and tomorrow.

“In accordance with election law, the ban will start at 6pm Saturday and continue until midnight Sunday,” Vice Governor Somkiet noted.