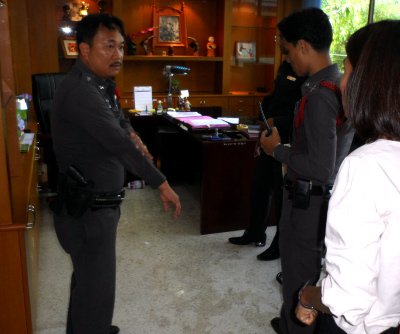 Arriving at the scene shortly after 10am, Phuket Police were met by a 20-strong-crowd of office employees who had caught the chief’s assailant.

“Mr Monthien told me that he found out that Mr Wuthiphong was in a relationship with his niece who also works in Phuket. He made the trip from Chantha Buri with the intention of confronting him,” Col Ekkasit explained.

“Mr Monthien believes that as a married man, Mr Wuthiphong should stay away from his niece,” he added.

Mr Monthien told Col Ekkasit that he arrived at the municipal offices with a plastic cup filled with a mixture of bathroom cleaner and water, after which he tricked his way past Mr Wuthiphong’s secretary.

“He told the secretary that he came to talk to Mr Wuthiphong about the construction layout.

“Once the secretary opened the door, he threw the liquid at Mr Wuthiphong, splashing him in the face. He then punched him several times in the face. His secretary tried to intervene and was also attacked. After that Mr Monthien tried to run but was caught by staff,” said Col Ekkasit.

Mr Wuthiphong went immediately to Phuket International Hospital, where doctors examining him determined that the liquid thrown at him was not strong enough to cause damage. However, he was left with some bruising to the face.

Mr Wuthiphong was quick to deny any accusation of philandering.

“The accusation that I have some kind of relationship with Mr Monthien’s niece is completely absurd and baseless. I love my family and would never do such a thing,” said Mr Wuthiphong.

“There’s an ongoing conflict in the work place and I guess someone might have hired Mr Monthien to hurt me,” he added.