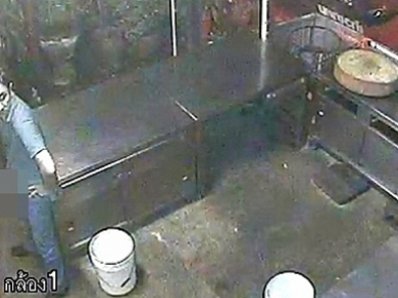 PHUKET: Phuket City Police are now searching for a man wanted for sexually harassing restaurant staff in Phuket Town after he exposed himself and masturbated in front of them four times in three days.

“We launched a search for him last night, but we have yet to find him. Our officers have been alerted to the car’s license plate number and have been searching areas around night entertainment venues,” Phuket City Police Superintendent Sermphan Sirikong told the Phuket Gazette today.

The news follows a restaurant owner in Phuket Town making a public appeal yesterday for people to beware of a man who has repeatedly exposed himself in front of her Burmese staff and masturbated in front of them.

Staff at the restaurant described the masturbator as a well-dressed, good-looking Thai man in his 30s, driving a car fitted with Bangkok license plates bearing the number 7346.

The last time the man approached the restaurant was on September 11.

“He had no clue he was caught by our CCTV,” she added.

One of the restaurateur’s Burmese staff members reported the man saying, “Don’t be afraid. Come with me, I will give you 500 baht.”

“At 4:24am, my mother came back from the market. He saw her and then jumped in his car, which was still running, and drove away. That was the last time we saw him. I uploaded the CCTV photo onto my Facebook page that same day,” she added.

The restaurant owner said she had reported the incidents to Phuket City Police, but her complaint was not accepted, prompting her to give a public warning yesterday.

“We want the media to publish this man’s picture to warn women in Phuket to beware of him,” she said.

“I would also like employers who have female workers to watch out for him. We never know where he might turn up next,” she added

Sen Sgt Maj Suwit Yimsong, from the Phuket City Police radio room, said he could find no record of the restaurant owner filing a complaint.

“I was [previously] unaware of this issue, and I had not received any reports of similar disturbances from any other police stations in Phuket.

“Perhaps there was a misunderstanding. Police will investigate this, but they need the person who has been offended by the public indecency to file the complaint. Someone else cannot file a complaint like this on their behalf,” he explained.