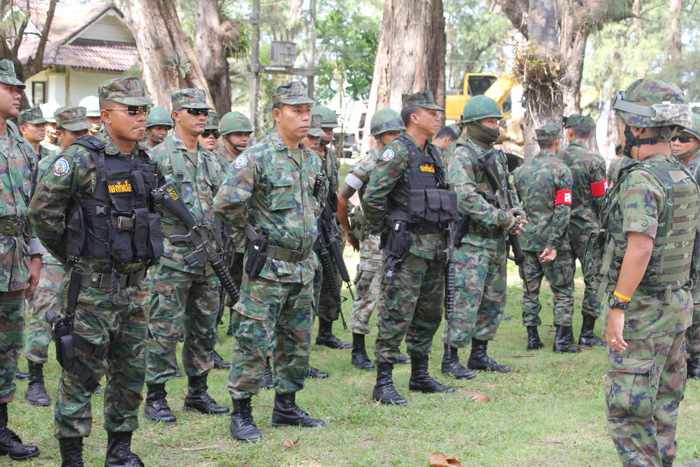 PHUKET: A total of 47 people today explained to the Navy how they came to possess plots of land deemed to be inside Phuket’s Sirinath National Park.

Present at the meeting to hear the explanations was Commander Pornprom Sakultem of the Third Naval Area Command.

One attendee, Tawee Ngerndee, told Cmd Pornprom that he “used to own” just over 10 rai of land along the border of – but now thought to be within – the park.

“I sold the plot to the Indigo Pearl resort, located on the Nai Yang beachfront, and the Indigo Pearl owners later upgraded the SorKor 1 land-use document to a full Chanote land title,” Mr Tawee said.

However, another attendant at the meeting, Wanlop Sae-Lao, presented a SorKor 1 – apparently issued more than 30 years ago by a former subdictrict chief (Kamnan) in Sakoo – to prove that he owned an undisclosed portion of same 10-rai plot that the Indigo Pearl now owns.

Both the Chanote issued to the Indigo Pearl and the SorKor 1 presented by Mr Wanlop were handed over as evidence.

“I will have to check further on how this is possible,” Mr Sitthichai said.

Some of the owners who had their restaurants torn down in the military clearing of the beaches also attended the meeting.

Seven of the people present denied that their plots were in the park and explained that they had launched court cases to fight eviction orders issued by the Sakoo Tambon Administration Organization (OrBorTor).

Another 11 people did not deny that their plots were within the boundaries of the park, but said that they still legally owned the plots in question.

A total of 29 people today relinquished any claim to plots in the park that they were ordered to vacate, and will not face any further legal action.

In closing the meeting, Cdr Pornprom explained that his orders were to wait for justice to take its course.

“Officials have yet to conclude their investigations, and if you disagree with their decision, then file a complaint with the court,” he said.

“If the court rules that your land was illegally acquired, we will enforce the eviction.

“However, if the court rules that certain plots were legally acquired and are legally owned, we will respect that decision.”

Regardless, Phuket Marine Office chief Phuriphat Theerakulpisut cautioned that his office was responsible for keeping beach areas outside of the park clear.

“Even if you have plots outside the park, if you encroach on beach areas and break the order issued by the NCPO [National Council for Peace and Order], then I will charge you under the Marine Act for encroaching on a beach area,” he warned.

Champion Nadal out of U.S. Open with wrist injury