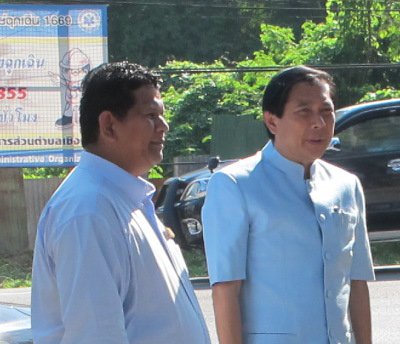 PHUKET: The Phuket Governor today called on Sydictive Element, organizers of the monster New Year party touted to be held on Surin Beach, to scale down the party so it can be approved.

“The best way is for the organizers and locals to meet halfway. If the two sides can come to a compromise, then I have nothing against the party,” Governor Maitri Inthusut told the Phuket Gazette today.

“The party organizer should keep in mind that no matter what they are going to do, it has to be acceptable to the local people, the local government and the private organizations,” Governor Maitri said.

The party, announced by global celebrity Paris Hilton in Bangkok and endorsed by the Tourism Authority of Thailand (TAT), was launched on the premise that it would attract about 50,000 partygoers.

However, fearing that beach vendors would lose business and residents would be disturbed by noise and crowds, Governor Maitri said that he would like to see the event downsized.

Gov Maitri expressed his concerns after Surin Beach hoteliers explained that just the announcement of the party alone had cost them 8 million baht in booking cancellations.

“Scaling down the party could provide an opportunity for beach vendors to work as usual and perhaps earn more. Furthermore, it will cause a lot less disturbance to residents,” Governor Maitri said today.

“Later, they will also have to talk with the Cherng Talay OrBorTor [Tambon Administration Organization] president before I can call everyone in and make a decision,” he explained.

Ma-ann Samran, president of the Cherng Talay OrBorTor, has repeatedly told the Gazette of his concerns about the impact of such a large party on the environment, as well as local residents and businesses.

“If the beach vendors cannot conduct their business during the party, then Sydictive has to compensate them. That would be a fair deal,” said Mr Ma-ann.

The Governor today also noted that representatives from Sydictive Element were to meet Marine Department officers today to explain how they intended to deal with a raft of issues, ranging from the effects on beach vendors, restaurant owners and local residents to how they will manage the area in terms of safety and cleanliness.

Phuket Marine Office chief Phuripat Theerakulpisut told the Gazette this afternoon that those negotiations were successful.

“I have given my permission for the party to go ahead. They [the party organizers] presented their plan to deal with the problems of having such a large party, and I was satisfied with their arrangements,” he said in a brief conversation by telephone.

Director of the Phuket-TAT Office Chanchai Duangjit confirmed that he, too, was willing to support Sydictive’s event on condition that they resolve concerns held by the vendors and local residents.

“If they can convince us that the plans to prevent problems that might arise before, during and after the party will work, and if those plans [appear to us to be] reasonable and practical, then I am more than happy to support them,” said Mr Chanchai.

Governor Maitri said that if all went well, he would be able to give his official decision next week.