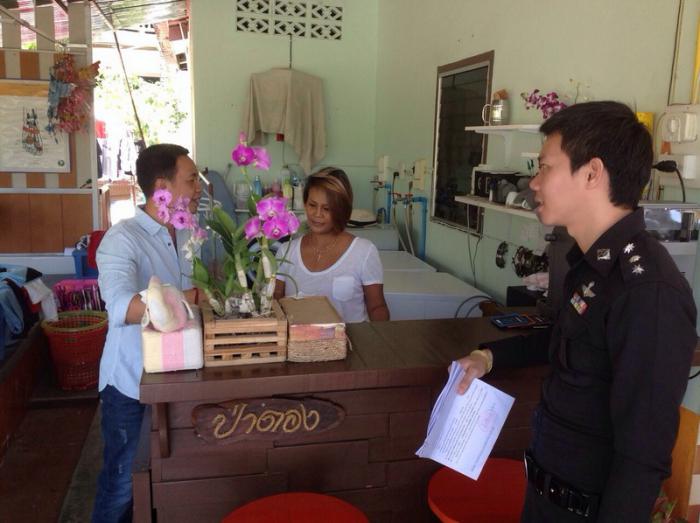 PHUKET: Police investigating stolen passports linked to the missing Malaysian Flight MH370 questioned the owner of a Phuket motorbike rental shop from which one of the passports used to board the flight was stolen.

Luigi Maraldi explained to the press yesterday that he filed a report to the Patong Police on July 25 last year confirming that his passport was lost after he left it as collateral for a rental motorbike (story here).

However, Somsak Sornsut, owner of B.N. Massage, who rented the motorbike to Mr Maraldi, told the Patong Police yesterday that he was not at the shop when Mr Maraldi’s passport was picked up by someone else.

“We kept his passport at the shop but, if he needed it for any reason, he could come back and borrow it as long as he returned it by the end of the day,” he said.

“My staff called to tell me that a foreigner had come to collect his passport. I asked her who and she said Mr Maraldi. I knew that he always brought his passport back to the shop in time, so I let my staff give it to him.”

“My staff said she showed the man she thought was Mr Maraldi four passports and let him choose his own. The man collected one of them and left another in exchange, saying it belonged to his wife,” Mr Somsak said.

“She did not doubt that it was Mr Maraldi because the man who collected the passport looked similar to the picture.”

Mr Somsak said he had forgotten about the exchange until Mr Maraldi came to the shop asking for his passport.

“I told him that he had already taken his passport and had yet to return it,” said Mr Somsak.

“We then checked all the passports we had and called every customer to ask if they had taken the wrong one. All of them confirmed they had not.”

After waiting three days in case someone returned the passport, Mr Somsak and Mr Maraldi reported it missing to the Patong Police.

“I took care of all the expenses of obtaining a temporary passport for Mr Maraldi. He left Phuket soon after that. I thought there were no more problems until now,” Mr Somsak told police.

“I had no idea that Mr Maraldi’s passport was used to board the missing flight. We have never encountered a problem like this before. We are happy to cooperate with the police and help sort out any matters concerning this issue.”

Police are continuing their investigation concerning the missing passports as it might play a part in the Malaysian plane mystery, said Lt Col Sutthichai Thianpho of the Patong Police.

“We are collecting documents related to Mr Maraldi’s missing passport. We are gathering as much evidence as possible to get to the bottom of it,” he said.

Police also discovered that the Russian woman’s passport that was left in exchange for Mr Maraldi’s had also been reported missing. The police are looking into this matter, said Col Sutthichai.