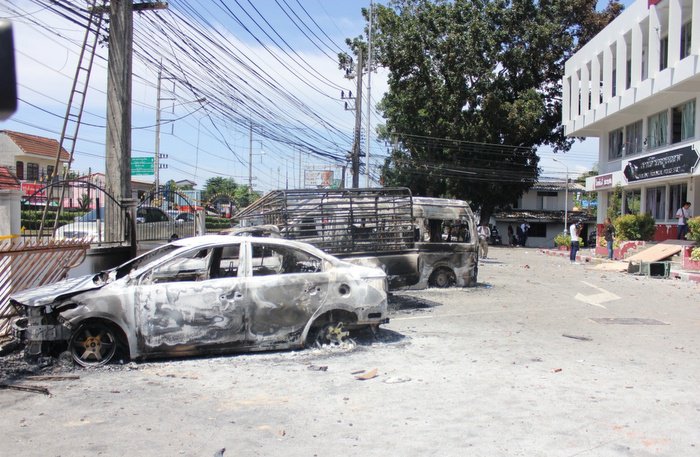 PHUKET: Tension between police and local residents in Phuket province that escalated into a riot at a local police station on Saturday evening appeared to ease after an inquiry panel was formed to look into the death of two young men during a police pursuit.

Police representatives met with families and relatives of Pathomwat Panarak, 22 and a 17-year-old teen, whose name was withheld, at a school yesterday with a military officer as a mediator. The meeting was held under a tense environment as supporters of the pair gathered around the venue, occasionally booing and jeering.

The meeting was held after local residents, including families of both victims, rallied in front of Thalang police station, angry over the death of the pair. They claimed police, without solid evidence, used excessive action on the young victims who allegedly refused to be searched and rode off on a motorbike from a police checkpoint.

Dozens of vehicles parked at the police station were burnt and police buildings damaged during the clash that involved hundreds of residents and officials on Saturday night and early yesterday. Four police involved in the case were transferred out of the area at about midnight on Saturday.

Suksri Kaentakian, mother of the teenage victim, said that if her son was involved in drugs, her family would certainly be very rich. “Police involved in the death of my son should be fired from the service and face legal action like ordinary people. I cannot accept that the incident came to an end after the involved police were simply transferred out of the area.”

Thaweesit Panarak, father of the 22-year-old, wept and said he had only one son. He admitted that his son used to use crystal meth or ‘ya ice‘ and was in jail. “I don’t think that my son would have had narcotics, as I believe he did not want to go back to jail again.”

“It is not acceptable that my son and his friend lost their lives this way. When police conducted the hunt, they had no evidence in hand that the boys had narcotics,” the father said.

Phuket Governor Chamroen Tipayapongtada said a committee would be set up to investigate the case and a fund set up to help the victims’ families.

At 3pm, protesters demanded that police discuss the case and bring the officers responsible for the pursuit to talk with them. However, police did not heed their demand.

The situation escalated in the evening when the protesters threw sticks and stones into the station, then hurled Molotov cocktails that destroyed the vehicles.

The protesters were angered by the police claim that they found 50 pills of methamphetamine and one kilogram of kratom leaves in the young men’s bags.

The tension seemed to decrease at 3am after Major General Theenachat Jinda-ngen, chief of Military Circle 41, came to stop the protest. After talks, they agreed to attend the meeting yesterday at Wat Bandon School. The protest dispersed at about 3.30am, ending a 12-hour stand-off.

Governor Chamroen said preliminary agreements were made at the meeting to set up an inquiry between police and local authorities to investigate the case, and set up a fund for the men’s families. “The case will be investigated without any bias and will bring justice to both sides,” he said.

Damage to the police station has yet to be calculated, but all windows in the three-storey police building were shattered, while the fence and signpost outside were wrecked and some 27 vehicles belonging to the authorities and private owners were burned. Fourteen police officers suffered minor injuries.

The riot also forced the road outside the station to be closed, which affected transport to Phuket Airport. Officials at the airport said 35 people missed their flights and nine planes were delayed on Saturday night.

Police spokesman Lt General Prawut Thavornsiri said National Police Chief General Chakthip Chaijinda had ordered police to investigate the case in a straightforward manner to bring justice to everyone and ordered the officers responsible to get people to understand the situation so the tension might be relieved.

“The next thing we’ll do is investigate the police who were responsible for the chase – and if they were really excessive [in their actions], they will be punished and aid given to the teenagers’ relatives,” he said.

He said police, doctors, local authorities and soldiers would conduct the autopsies, which would be done as soon as possible, so results could be known within seven days.

The prime minister expressed sympathy to the families of the deceased.

How the Thalang riot unfolded

11:20am: Two young men die after being chased on their motorcycle by Phuket’s Thalang police.

1pm: Thalang police inform the public that they found 50 amphetamine pills and one kilogram of kratom leaves in the young men’s bags.

3pm: Relatives and friends of the teenagers gather in front of Thalang Police Station and demand its chief tell the truth and bring the four officers responsible for the chase before the public.

4:30pm: Around 100 people protest in front of the police station.

6.30pm: The protesters close the road in front of the station after the authorities fail to provide them with an acceptable answer.

8pm: A suspected gunshot is heard, leading the protesters to believe the police fired at them, so they besiege the police station.

9:30pm: The situation gets worse. The protesters throw sticks, stones and eggs at the station.

10:30pm: The protesters start to set fire to police vehicles and other cars parked at the station.

11:25pm: Thalang police ask for and receive reinforcements, but they still cannot control the situation.

Midnight: The four police officers involved in the deadly chase are ordered out of the station, while the reinforcement squad is asked to help other staff trapped inside the station.

3am: Maj-General Theenachat Jinda-ngen, the Military Circle 41 commander, and a group of soldiers negotiate with the protesters and ask them to stop the protest.

3:30am: The protesters agree to disperse and have further talks with the authorities at 9am at Wat Bandon School.

9am: The talks between the relatives of the dead young man and teenager, police and the military commence.

11am: It is decided a joint committee will be established to investigate the deaths, with a fund to be set up for the young men’s families.