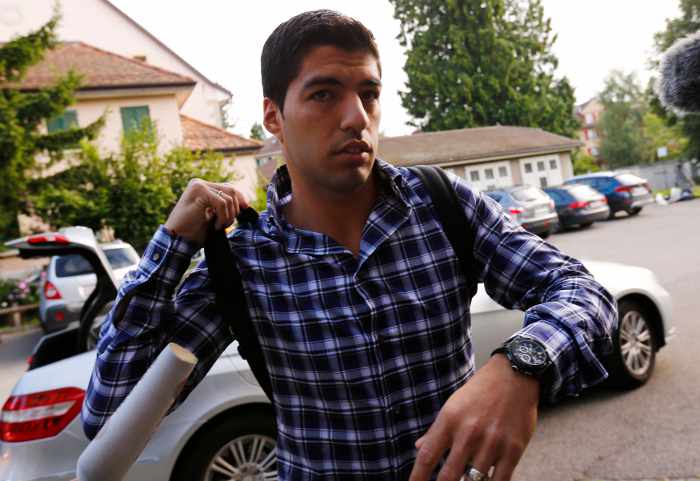 PHUKET: The Court of Arbitration for Sport (CAS) began its hearing on Friday into Uruguay forward Luis Suarez’s appeal against his ban for biting Italy defender Giorgio Chiellini in a World Cup match.

Suarez, wearing a checked shirt, brushed aside photographers and refused to make any comment as he arrived by taxi at the CAS headquarters in a Lausanne suburb.

The 27-year-old has been banned from all football activity for four months and suspended for nine competitive internationals by FIFA following the incident which shocked audiences worldwide.

Suarez, who has left Liverpool and joined Barcelona since the incident, has already lost an appeal before FIFA’s own disciplinary committee.

Banned twice before for biting, he initially denied sinking his teeth into Chiellini but then apologised for the incident one week later.

The hearing, expected to last all day, was being held behind closed doors and CAS said in a statement that “the final decision is likely to be rendered some days after the conclusion of the hearing.”

The ban means that Suarez will not be able to make his Barcelona debut until the end of October and will miss the whole of next year’s Copa America in Chile, when Uruguay play their next competitive matches.

Uruguay will play a minimum of three and maximum of six matches at the Copa, meaning that Suarez will also miss between three and six matches of the 2018 World Cup qualifying campaign.

“The biggest issue is the nine matches because it could mean, depending on the performance of Uruguay in the Copa America, that Suarez could be prevented from playing (for Uruguay) until 2016,” said Daniel Cravo, a lawyer representing the Uruguayan Football Association (AUF).

“(That) is a long journey for a player who is already 27 years,” he told reporters. “We have to have a controlled optimism because we have to respect the panel.”