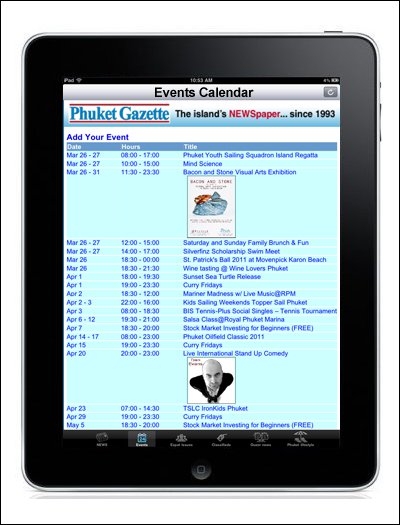 PHUKET: Long a leader in online publishing, the Phuket Gazette has taken a leap into the handheld space with crisp and functionally ‘immediate’ new Apps for both the iPad and iPhone. And though only a couple of weeks into these new media, the company is more than pleased with the response.

“These were basically R&D-type projects for us. I don’t think anyone here thought they would lead to so much market interest. We’re looking for download number 400 before the end of this week, meaning an annual rate of something close to 9,600 – right from the start,” said Gazette publisher John Magee.

The Gazette’s iPad App is currently the first to appear in Apple’s search results under the search term ‘Phuket’, and is the only App available from any media company in Phuket.

The iPhone App, available for both versions of the phone (3 and 4), is one of 37 Apps for Phuket, and one of only two offered by media companies here, the other being FM Radio 91.5.

Both of the Gazette Apps are free downloads. For the iPad, the daily content, which changes many times every hour, is completely free of charge. The company’s revenues will come from advertising, starting in July this year.

Thus far, most iPhone subscriptions have been for 6 months and the company expects a high renewal rollover rate based on it’s experience with the Digital Gazette where more than 80% of subscribers renew annually.

Gazette IT Manager Seubsak (‘Big’) Sahaworapun, who led the team programming the new Apps, notes that, “With either ‘pad or phone’, Gazette readers can comment in our Web forums; place classified advertising; promote their own events in our Calendar; and even raise issues that affect them personally in their day-to-day lives in Phuket.

“And of course they can read, while ‘on the go’, all of the Daily News, Lifestyle features and Queer News available in the Gazette Online – in a super-clean format and without lugging around a computer.”

The iPad App can be downloaded here; and the iPhone App is available here.

Are these trendy (ughhh) new devices and their Apps for the youth market only?

“I don’t believe the popularity of digital publications is necessarily age-segmented at all,” Magee says. At something well past 60, I bought an iPad four months ago and have become addicted to it – the world in your hands, and on a screen which is just the right size.”