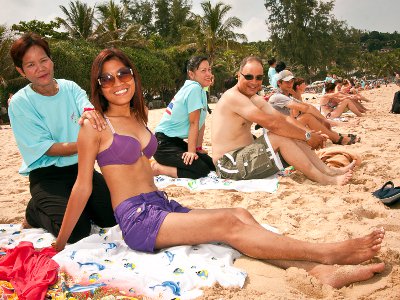 A total of 584 pairs of hands worked in unison to rub and relax, surpassing the current official record of 232 pairs of hands set by “Tourism Victoria Australia”.

An officer with the Ministry of Health explained that although many of the events – including those in Ubon Ratchathani and Phuket – had more participants than the current record, Guinness World Records would be invited to attend the official attempt at the record in Bangkok later this year.

“The event today is part of ‘Nuad [Massage] Thai for World Record’. Phuket is the third place where this has been held. The last two will be in Surat Thani and Bangkok on November 17,” said Dr Somchai Pinyopornpanich, director-general of the Ministry of Health’s Service Support Department.

Danish tourist Bente Kjaer was happy to play his part.

“I received a note from my hotel telling me about this event, so I came. I have tried Thai massage before and it is addictive. This is one of the reasons I come to Thailand,” he said.

Beach vendor Manee Sinnawong took time out from her routine for rubdown.

“I usually do not have time. My shoulders were very stiff from working, so it’s great to have the chance to relax my body today,” she said.

Masseuse Sudarat Wannaraksa, who works at a local spa, said she had never seen an event like this before.

“Normally, I give massages in an air-conditioned room. It is very hot today and the focus is on the head, neck, shoulders, back and face. All the masseuses today follow the same routine,” she said.

Welcome to Phuket: Swede robbed of B1 million on Day One