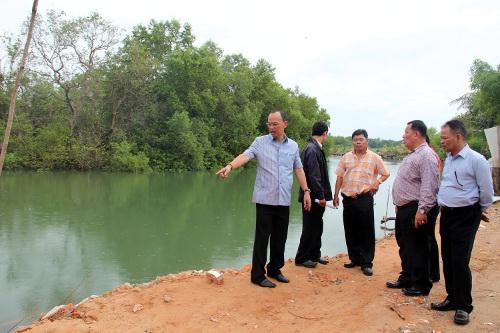 PHUKET: The 70 rai of protected mangrove forests investigated on Phuket yesterday in fear it was being illegally encroached on was whittled down to only two rai after a followup probe this morning.

“After I examined the Klong Mudong area in Chalong again today, I was able to determine that only about two rai of the land being reclaimed by developers is actual mangrove area,” Pongsapak Aiabsakul, chief of the Mangrove Forest Resources Development Station Phuket office, told the Phuket Gazette today.

Land documents for the rest of the area in question do exist. However, Mr Pongsapak said the documentation would have to be examined to ensure that they were legally obtained.

“I have already filed a complaint over the two rai of mangrove forest destroyed to Chalong Police,” he added.

“Muang District officers will be ordered to stop people from further dumping trash in the area. They will also be asked to remove the rubbish already present and take it to the incinerator at Saphan Hin,” V/Gov Somkiet said.

The land probe also unearthed that the huge amount of rubbish dumped at the site had already inflicted much harm to the mangrove forest ecosystem.

“The destruction of the mangroves has been ongoing for decades. We will need some help from the central government to protect them from developers encroaching on them. However, we can start on solving the problem immediately,” V/Gov Somkiet said.