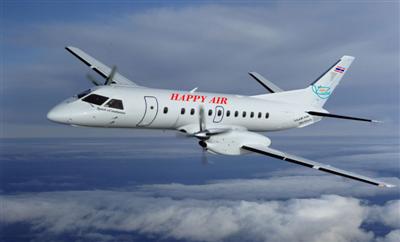 Joe Sontipun, sales and marketing director of the Phuket-based scheduled carrier, said the new flights will begin on Wednesday, when seats will be offered at a special promotional rate of just 1,000 baht, one way, all inclusive.

Seat prices will increase to the normal 1,500-baht fare thereafter.

Load factor on Happy Air’s Phuket – Haad Yai route, currently about 70% to 80%, continues to rise as more people learn about the service between the south’s two largest airports, he said.

All inclusive at 1,900 baht one way, the flights include in-flight snack and beverage service and up to 15 kilograms of luggage free of charge.

Thus far the service has been most popular among Thais, but many foreign tourists and expat residents making ‘visa runs’ to Penang and other cities in Malaysia are also beginning to use the service to avoid the 10-hour bus ride between Phuket and Haad Yai.

Haad Yai is located just 50 kilometers by road from the Malaysian border.

Happy Air on June 26 will resume its Phuket – Langkawi service, which was temporarily suspended just after the Songkran holiday in April, Mr Sontipun said.

It has also suspended some other routes, including one between Don Meuang Airport in Bangkok and Buriram, that it tested for a short trial period earlier this year.

US consular visit to Phuket