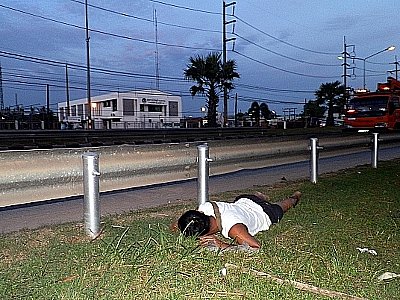 PHUKET: A drunken man chose an exceptionally bad place to sleep off the effects of alcohol over the weekend: in the middle of the busiest and most deadly road in Phuket.

A good citizen called the Phuket Kusoldharm Foundation at 6:45pm yesterday to report that a man was asleep in the left lane of Thepkrasattri Road outbound in Srisoonthorn, opposite the Provincial Electricity Authority substation in Baan Lipon.

Rescue workers raced to the scene, arriving just as the final hints of twilight were disappearing from the evening sky – making the man’s site of slumber even more precarious.

After initial efforts to rouse the man failed, the workers administered smelling salts.

In what the workers describe as highly slurred speech, the man admitted he was “really, really drunk” and said he “just wanted to sleep it off”.

When the workers offered to give him a ride home, he refused.

As rescue workers lack the authority to force help upon people who refuse it, all the Kusoldharm crew could do for the man was to help him over the guard rail and onto the grassy shoulder, where he promptly passed out again.

He remained there as the workers drove off into the night.

His current condition is unknown.