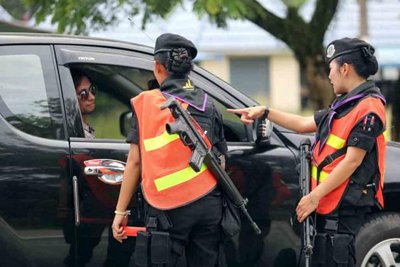 PHUKET: Three men have been arrested for their alleged role in Saturday’s fatal shooting of four soldiers in Pattani, according to Pattani Governor Thira Mintarasak.

“We have also retrieved 9mm guns stolen from the slain soldiers,” Thira said.

Thira said the shooting might have involved more than 30 accomplices, many of whom came from nearby provinces.

“We believe 19 of them came from Yala and Narathiwat. Between eight and 10 others came from Songkhla’s Chana district,” he said.

Thira believed the accomplices wanted to avenge the extrajudicial killing of an insurgent leader, Adinan MasaI.

“We are in the process of identifying all attackers seen in the footage from a security camera,” he said.

He also convened a meeting of all local police station chiefs to step up security measures in the province.

A source said suspected insurgents had already turned two pickups into car bombs and were plotting to detonate them in Muang Pattani municipal areas.

At least two more violent incidents erupted in Pattani early yesterday. The first attack took place in Mae Lan district with two young men shot dead. Pirawat Pitkij, 25, and Yuttana Meechamnan, 19, were gunned down while they were heading back home on a motorcycle at around 1am.

The second attack took place in Yarang district. Zakareeya Tasu, 45, was shot in the head while walking back home in the small hours of yesterday.

Police are investigating the two cases.

Meanwhile, the Justice for Peace Foundation urged Prime Minister Yingluck Shinawatra to prioritize efforts to resolve the unrest in the deep South.

PHUKET: The former chairman of the Bank of Thailand last week sharply criticized the current chairman and the government for its attempt to exploit the country’s international reserves and for its lack of fiscal discipline.

“Reserves are reserves. Its name tells us what it is. Don’t try to make profits from reserves,” MR Chatu Mongol Sonakul said.

The baht also would depreciate due to the government’s lavish spending plans, he said.

Finance Minister Kittiratt Na-Ranong and central bank chairman Virabongsa Ramangkura are believed by many observers to have deliberately tried to make use of foreign-exchange reserves worth US$170 billion (5.4 trillion baht) held at the central bank.

Kittiratt often insists that the government has the duty to reallocate the country’s resources to manage the economy efficiently.

The government plans to invest 350 billion in flood prevention and 2 trillion baht over seven years in infrastructure. But central bank governor Prasarn Trairatvorakul is concerned about the lack of fiscal discipline on the government’s part.

The central bank also argues that foreign reserves are not large compared to foreign investors’ claims on Thai assets.

Kittiratt was believed to be behind the nomination of Virabongsa as chairman while the Bank of Thailand had nominated Chatu Mongol.

After assuming the post in June, Virabongsa asked the central bank to address the issue of its loss of about 400 billion baht.

“Why try to solve what’s not the issue?” Chatu Mongol asked.

Many governments leave the central bank’s bottom line in the red.

There is no problem with the credibility of central banks in paying back debts because they can create money.

“Moreover, in the case of Thailand, large international reserves ensure that we have money to repay debts,” he said.

The government and Virabongsa want the central bank to float interest rates, but aggressively intervene in the forex market to make the baht weak.

He said he supported the weak baht policy to help the export sector, which is expected to contribute greatly to economic growth.

“But when I was a chairman I couldn’t convince the central bank’s Monetary Policy Committee,” he said.

He was referring to the central bank’s typical argument that the baht is not stronger than competitors’ currencies and the economic growth of trade partners is more important for Thai exports than a weaker baht.

Now the baht has sunk to about Bt31 per dollar from the recent Bt30 level due to global investors holding safe haven assets – dollars and US government bonds. And as Thailand’s exports fall from the global crisis while its imports surge, leading to balance-of-payment deficits, the baht would weaken.

“Now the baht is weak so there’s no problem of a stronger baht and the trend is expected to continue because the government plans to spend lots of money,” he said.

He does not agree with the government’s plan to use the fees collected from state-run banks to fund new government projects.

“The fees should be used to repay existing liabilities, not to finance new projects,” he added.

The two-time world junior champion took just 21 minutes to defeat her hapless Sri Lankan opponent in the Group M match. The 17-year-old player will next take on Telma Santos of Portugal at 8pm Phuket time tonight in her second preliminary round match. Four other Thais were scheduled to take to the court later yesterday. Thai ace Boonsak Polsana was handed the toughest assignment, taking on world No 3 Chen Long of China in the two-member Group E. The winner goes to the next round.

After an opening 21-11 21-16 victory over Indonesians Mohammad Ahsan and Bona Septano on Saturday night, the men’s doubles team of Bodin Isara and Jongjit Maneepong were to play their second match against South Korea’s Sung Hyun and Yeom Seong Yoo.

In shooting, Tanyaporn Prucksakorn failed to book a place in the women’s air pistol final after a 383 in the preliminary competition. Countrywoman Naphaswan Yangpaiboon shot 370 for 40th position.

Thailand’s high hopes of winning their first medal through Panida Khamsri and Siriwimon Pramongkol were dashed on Saturday with both weightlifters returning empty-handed in the women’s 48kg class.

Wang’s gold medal ends one of the longest-running anomalies in women’s weightlifting.

Although the 26-year-old has dominated her scandal-tainted sport for a decade, she was mysteriously omitted from China’s