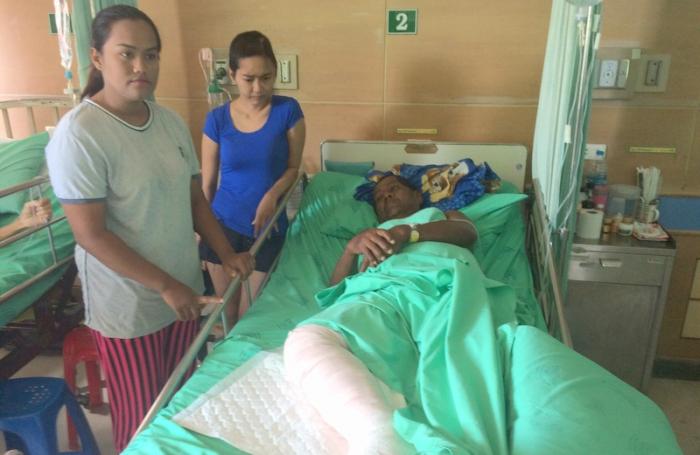 PHUKET: A 63-year-old Phuket man has undergone two surgeries and almost had to have his leg amputated after a seemingly harmless scratch by a cat last week.

“Warning! If anyone gets scratched by a cat, please ensure that you receive medical attention immediately. If not, you may get infected like in this picture. It was just a scratch, not even a bite, so we did not worry about it at first. After three days, it became much worse, like in the picture. Doctors told us that if we had come a day or two later, they would have had to amputate the leg.”

The victim, named Veera Panthip, 63, is now under close observation by doctors at Vachira Phuket Hospital.

Ms Rungnapha said that Mr Veera was scratched on his calf on January 16, but did not seek medical attention immediately, as the injury seemed innocuous. The next day, however, he had a fever and the wound started swelling. The day after that, he decided to see a doctor.

“Our family is in crisis. My husband is sentenced to jail, whereas my sister-in-law was just involved in an accident and cannot work. My father-in-law works as a boat captain, and is the bread earner of the family, but now I have to bear that responsibility alone,” she added.

Dr Chalermpong Sukonthapon, Director of Vachira Phuket Hospital, and his team convened a press conference regarding the case.

“We diagnosed Mr Veera with an infection called necrotizing fasciitis, which is caused by harmful bacteria that damages skin, muscle and fat under the the skin,” said Dr Chalermpong.

“Mr Veera has a low platelet count and is suffering from kidney disease as well. His immunity was already weak and the bacteria was easily able to infect him,” he added.

At this stage, doctors say they cannot cut out much more of the infected area without endangering the patient’s use of his left leg.

“It will take a long time to heal, but we are monitoring him closely and might be able to save his leg,” said Dr Chalermpong.

“This is a very rare disease, which only exists in people who have low immunity or use steroid-based medication. We would like to warn everyone that if they suffer from any injury, even a small one, they should seek timely medical attention for it,” he added.