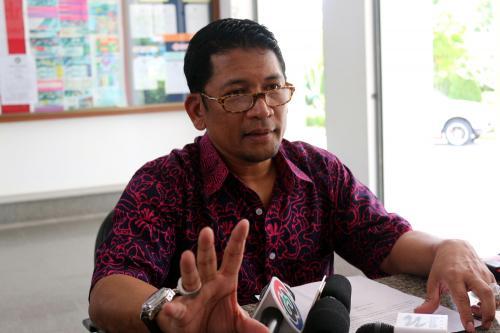 PHUKET: A Phuket businessman and adviser to the Thailand Trade Organization turned around allegations of being a Patong extortion artist today, pointing his finger at a government official.

However, Chart Chindapol was unwilling to name the official, who he claimed raked in 50 million baht a month, pocketing 3 million for himself.

A letter accusing Mr Chart of “distressing, threatening and persecuting local entrepreneurs” was sent to the Phuket Media Association on July 23 and signed off by the Association for Honest Patong Entrepreneurs.

The letter alleged that Mr Chart bragged of having local government officials, police and media all under his control, and therefore was able to engage in his extortion practices more effectively.

“I know who wrote the letter and why the letter was written,” Mr Chart said. “This individual is a local government officer, who has been impacted by the anti-corruption project that I initiated. But I cannot reveal the person’s name at this time.”

“I personally have received many complaints from Patong business owners about local government officers demanding extortion money, totaling about 50 million baht a month. This corrupt official skims about 3 million baht off of this a month,” Mr Chart alleged.

Patong business owners bribe officials, from 17 local government offices, to overlook closing times for night-entertainment venues, the selling of pirated goods, the use of illegal workers and so on, Mr Chart said.

Mr Chart also cast his doubt over the authenticity of his accusers, the Association for Honest Patong Entrepreneurs, which he said was not a registered Patong association.

He also took his moment in the media spotlight to promoste the Patong Special Administration Zone (story here), which he said would adjust the laws in the party town in a way that would cut back on the amount of corruption.

“Mindful that nightlife in Patong only really gets going at around 8pm, we could extend opening hours of entertainment establishments. Then business owners can be fairly taxed by the government, which is a preferable alternative to paying local officials under the table,” he said.

“We have not heard of this case. However, if somebody wishes to file a police complaint, an investigation would be started,” Maj Gen Choti. “We would of course provide fairness to all parties.”