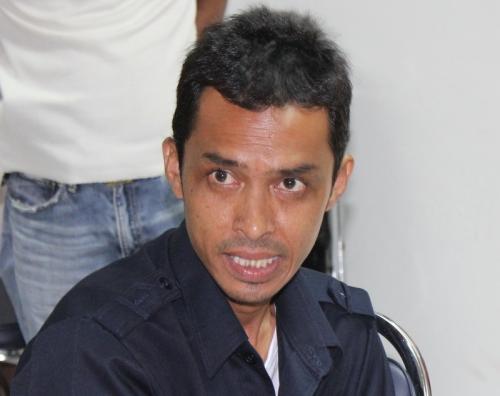 PHUKET: A guard working for a Phuket security firm was arrested today for allegedly topping up his own pockets with 500,000 baht instead of topping up an ATM at a gas station near Wat Chalong.

The arrest follows Progress Gunpai Co Ltd filing a police complaint against one of their own security guards, Samphan In-Auksorn, 33, from Nakhon Sri Thammarat, whose job was to refill ATMs for Kasikornbank.

“At 8am on February 18, Kasikornbank ordered Progress Gunpai Co Ltd to refill the ATM at the PTT gas station near Wat Chalong (map here) after the ATM sent an automated message to the bank saying that it had run out of cash,” Lt Col Serm Kwannimit of the Phuket Provincial Police explained.

Since the ATM had just been refilled on February 14, staff at the bank became suspicious and asked the security firm to check their system, at which point they discovered that 500,000 baht had disappeared from the machine.

“The security firm checked their records and found that after the February 14 top-up, the ATM was re-opened on February 16,” Col Serm said.

The reopening of the ATM was not authorized, he added.

“There was no trace of the ATM being forced open. The security firm believed that Mr Samphan stole the money because he and his team topped up the ATM with cash on February 14 and he was the only member of the team who had the key and knew the security code to unlock the ATM,” Col Serm said.

A warrant for Mr Samphan’s arrest was issued on Friday and police took him into custody this morning while he was topping up another Kasikorn ATM in Phuket Town.

“Mr Samphan said he worked on February 14 and took time off from February 15-17. While he was away, he left the key with one of his friends, Somkuan Sakulrat.

“He returned to work on February 18 and was informed that the money had disappeared,” Lt Col Arun said.

Police will now continue their investigation into the alleged theft, he added.