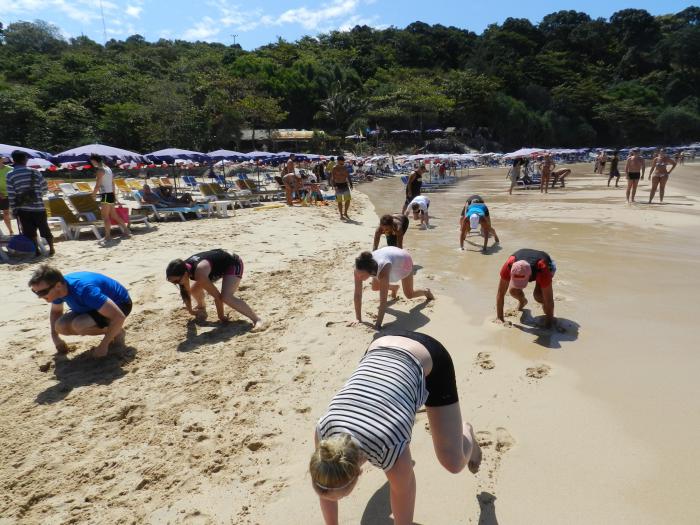 PHUKET: A Phuket exercise and beach-cleanup group saw an abrupt end to their activities on March 15 when lounge chair touts battled them for space on Nai Harn Beach.

“Clean the Beach Boot Camp” is a free event held every two weeks aimed at bringing together local expats and giving back to the community, explains Krix Luther, the health and fitness specialist who has been running the events since May 2013.

“As we were setting up near the lagoon end of the beach, a chair operator asked us to move our stuff away from his chairs [the forth line of chairs], insisting that we were blocking the view,” said Mr Luther.

There is a maximum of two rows of chairs and umbrellas allowed on the beach, except in high season, when three rows are allowed to accommodate the increase in tourists, according to Rawai Umbrella and Beach Chair Club Regulations.

“This was the only dry patch of sand we could find, as chairs were taking up the majority of the beach and it was high tide, so we refused to move.”

This is not the first time the group has been approached by chair operators unhappy with the groups activities.

Mr Luther has received a multitude of complaints from beach touts in the past, ranging from the group placing equipment too near to their chairs and the group training in their “chair territory”.

“Usually, after a few minutes, they give up,” Mr Luther said.

However, that was not the case on March 15.

When high tide subsided, the group was able to move away from the contested area and begin training, Mr Luther explained.

“We were able to secure a 10 by five meter area of space for training, but before I could get through the warm ups, the chairmen began slamming down their umbrellas in the middle of our spot; so close that I thought they were going to hurt one of the tourists in the group.

“We continued on for a few minutes, then they started to put out the chairs and tables. We had no choice but to stop and ask them what they were doing,” he said.

Some of the expats confronted the vendor leading to a brief, violent argument that teetered on the edge of physical violence, Mr Luther explained.

However, the situation did not boil over.

“We assembled, got our stuff and discussed what to do… the damage was done, moral was low and the atmosphere was lifeless. We had a very short, uncomfortable workout and cleaned up the beach for about 20 minutes before we left,” Mr Luther said.

The tourists who had taken part in the event were “pretty disgusted” with what they saw and the regular boot campers said they did not wish to return to Nai Harn.

“I hold these events as a way of giving back. It not only brings expats together as a type of meet and greet but it also helps our community. Everyone goes home feeling good, like they started the weekend off on a productive high,” Mr Luther said.

The group plans hold the event at Nai Harn again on Saturday.

“Pollution in the ocean is a massive, worldwide problem, and if the ‘Clean the Beach Boot Camp’ is helping on even a microscopic level, I will continue to do it,” Mr Luther said before returning to Nai Harn.

Dynamic Without Fins competition next in the Phuket Suunto Series