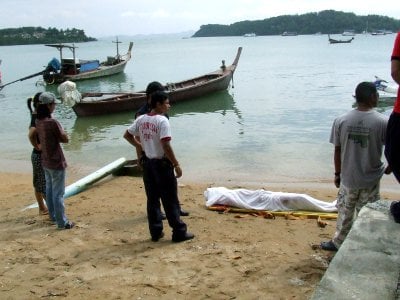 PHUKET: A longtail boat operator drowned near Phuket’s Ao Por Pier this morning as his uncle helplessly looked on.

The drowned man’s uncle, “Rut”, described the series of events to family friend Suriya Dujpayak, but was too grief-stricken to speak to the press.

Boonchuay Piewsoy, 35, developed cramps at about 7:30am while swimming out to his boat, which was anchored about 100 meters offshore, said Mr Suriya.

Mr Boonchuay called out to his uncle for help before going underwater.

Mr Rut and seven other witnesses rushed to help, but were unable to save Mr Boonchuay. They continued to search for his body for almost an hour before calling the Thalang Police.

Kusoldharm Rescue Foundation workers arrived at the scene at 10am.

With the tide going out, it took two Kusoldharm Foundation divers only five minutes to locate the body on the sea floor in about a meter of water, said one rescue volunteer.

Mr Boonchuay had been living with his father in Baan Bangrong, Pa Khlok, and working as a longtail ferryman, taking people between Ao Por Pier and Koh Rad.

His body is now at Thalang Hospital.

Floods force Bangkok buses to Phuket to relocate to brewery

Training tips for the Phuket Triathlon – fuel for your body