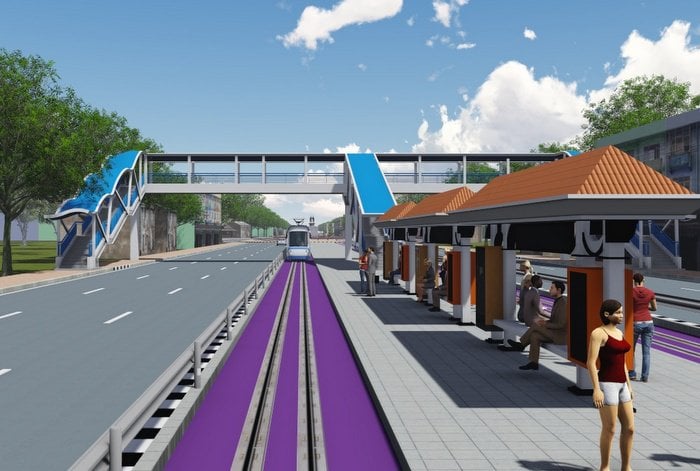 PHUKET: The long-awaited project to build a “light rail” mass-transit system to ferry tourists and residents the length of the island passed its third and final public hearing on Tuesday, when it was revealed that construction is slated to begin in 2021.

The 23.5-billion-baht project has been heralded as an enormous development for the island’s tourism and property industries, with comparisons drawn against Phuket’s major tourism and developmental rivals, including Koh Samui and Bali.

“A Phuket light-rail project is a game changer for the island,” said Bill Barnett, founder and managing director of C9 Hotelworks, a Phuket-based leading hospitality consulting firm that specializes in the Asia-Pacific region.

“You have to look no further than Bangkok and the advent of how the BTS Skytrain re-wrote the capital’s business, tourism and property map. It transported the Chao Phraya and Silom markets into the Sukhumvit area, and to this day is a key economic indicator for real estate and economic growth.”

“As seen in Bangkok, developers looks to direct links for new mixed-use projects. As we all can see, Phuket is evolving into an urban destination and this is the logical step for growth,” he said.

“Instead of astronomical year-on-year growth in motorbikes, we will see public transport slowly weave into the culture of Phuket.”

Mr Barnett, a Phuket Gazette property columnist for more than a decade, predicted that the convergence of Phuket Town and Patong will happen in Kathu, once the light rail comes and the Patong tunnel is completed.

However, Mr Barnett questioned why the plans for the Phuket light rail don’t account for the transport system to be elevated, as in Bangkok, Manila and other retrofitted mass urban destinations.

“Eventually, a central feeder from north to south, combining a larger highway and light rail is the only option given the lack of land on coastal routes,” Mr Barnett said.

“But one of Phuket’s best strengths that Bali and many other island destinations, including Samui, do not have is a central corridor that can accommodate mass transit.”

The public hearing on Tuesday, held at The Metropole Hotel in Phuket Town, was attended by about 350 people, and chaired by Peraphon Thawornsupacharoen, director-general of the Office of Transport and Traffic Policy and Planning (OTP).

“After this final public hearing, Enrich Consultants Co Ltd will submit their plans to the OTP. We will then review it,” he told the crowd.

“If we agree with all aspects of the plan, we will then submit it for approval to the committee reviewing its Environmental Impact Assessment.”

The light-rail system will originate at Tha Nun, on the north side of the channel that separates Phuket from the mainland, and continue to Phuket International Airport. It will then head south through Phuket Town and Saphan Hin before continuing along Chao Fa East Road to terminate at Chalong Circle.
“There will be 20 stops along the 60-kilometer track,” explained Kitti Kijmanawat, logistics expert at Enrich Consultants and the project’s lead engineer.

Residents at the meeting voiced their support for the project, but called for the OTP to ensure safety measures were included to prevent accidents. Additionally, they requested car parks at the major stops in Phuket Town.

“Please think about people who have to drive to get to the light rail. There are not many places for people to park,” said Satirapong Na Takuathung, president of the Phuket Tourist Association.

Don Limnantapisit, a leader in the Phuket Old Town community, called for parking areas for taxis near the stops, while Phuket City Mayor Somjai Suwansupana urged the project team to make a special effort to preserve the facades in the Old Town.

“The project is for the future of Phuket, so please help us maintain the identity of Phuket Old Town so it can be seen by Phuket’s future generations,” she said.

“Also, we will lose one lane in Phuket Old Town to the light rail. I hope experts have a clear understanding of how this will affect traffic in the area.”

Pongsan Jongjinnan, from Baan Mai Khao at the northern end of the island, voiced his support, but called for more stops outside of Phuket Town.

“From what I can see, most of the stops are in Phuket Town… I would like to see the project support elderly and disabled people. Also, there are schools along the route outside of Phuket Town, which deserve stops,” he said.

Vendors to be allowed back on three Phuket beaches