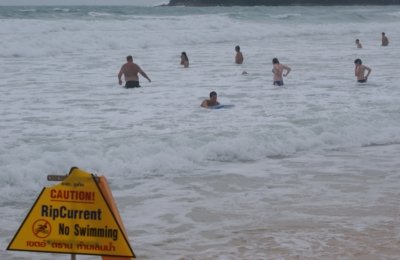 The guards, led by Kamala Beach head lifeguard Tawee Sariya, were met by PPAO Vice President Chawalit Na Nakorn at about 11:30am.

The guards complained that all 67 members of the former beach guard hired under a PPAO contract with the LP Laikham Company failed to receive the last two months of their 9,500 baht salaries.

The lack of income was making it difficult for them to support their families, they said.

The five-month contract between the PPAO and LP Laikham expired on November 18; Phuket beaches have been left without lifeguards since that time.

The PPAO would like to find a new firm to take over the new contract, which it hopes to have signed by the year’s end. An expansion in the number of lifeguards from 67 to 83 is planned, a PPAO source told the Gazette earlier.

There is also a dispute over safety equipment purchased by LP Laikham, with the former beach guard members saying they were not properly equipped with items such as swim fins and life jackets, as specified in the contract’s terms of reference.

Mr Chawalit acknowledged the problem and said he would review labor laws to see how the guards could be paid as soon as possible.

The problem was that LP Laikham, which is responsible for paying its staff, had in many aspects failed to fulfill its side of the 10-million-baht contract to provide lifeguards and safety equipment at 22 points on seven beaches: Nai Harn, Kata Noi, Kata, Karon, Patong, Laem Singh, Kamala, Surin Beach, Bangtao, Nai Thon, Nai Yang and Mai Khao.

Managerial issues, not financial ones, were the root of the problem, a PPAO source told the Gazette earlier.

“The problem is the way they manage their team. They should work harder and co-operate in a better and friendlier manner with local groups, such as the jet-ski operators,” the source said.

In the most recent development, all 67 lifeguards will today submit their names and bank account information to the PPAO, which is preparing a court case against LP Laikham for breach of contract.

The Phuket office of the Social Welfare and Labor Ministry will also help in getting the unemployed lifeguards their back pay.