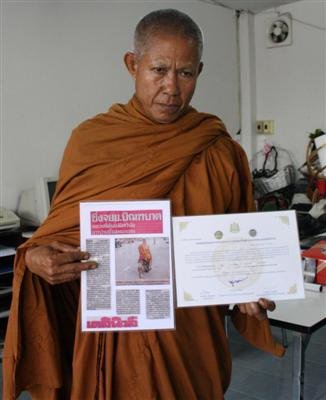 PHUKET CITY: A monk from Krabi made his way to the Phuket press club office yesterday in an effort to clear his name following a newspaper report that he was breaking the monk’s code of conduct by using a motorbike instead of walking during his morning alms collection.

A photo of Phra Tossaponchana Kommasutho of Wat Tamtheppratan in the Muang District of Krabi was published in the mass-circulation Daily News on November 10.

The feature showed the monk begging for alms in Tambon Tab Prik aboard a Yamaha Nouvo motorbike.

The report alleged than Phra Tossaponchana didn’t care that the public tends to view it as inappropriate for a monk to use a motorbike, especially when collecting alms.

Phra Tossaponchana said the reporter never asked him why he needed to use a motorized conveyance to conduct his alms round.

The negative publicity had badly damaged his reputation, he said.

None of the 227 precepts for clerical conduct set down by the Lord Buddha specifically forbids the use of a motorbike, he said.

In addition, he had already asked for, and been granted, permission by higher-ranking monks to use the motorbike.

Phra Tossaponchana said he needed to use a motorbike because of the length of the route.

The real reason behind the report is a land dispute with a high-ranking government official who wanted to develop over 30 rai of beautiful temple land with caves as a tourist attraction, he said.

Phra Tossaponchana presented a certificate issued by the Forestry Department to back up his claim that the temple had the right to the land.

When Phra Tossaponchana resisted, the aforementioned official began a smear campaign against him, causing local residents to denounce him as profane.

“Claims that I spoke harshly with villagers are completely false. I only spoke in such tones to those who would despoil temple grounds,” he said.

Phra Tossaponchana said he had already filed a complaint about the article with the Muang District Police about the alleged defamation and encroachment on temple grounds.

He has already petitioned the Ministry of Education, Government House and the National Counter Corruption Commission about the case, he told reporters, adding that he expected action soon.