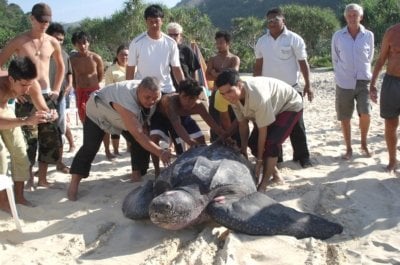 MAI KHAO, PHUKET: Hopes that two clutches of eggs could spell a reversal of fortune for Phuket’s endangered leatherback sea turtle population were dashed last month when the eggs failed to hatch.

The two clutches, thought to have been laid by the same female, were the first in several years at Mai Khao Beach, once famed nationwide for the scores of enormous leatherback turtles that came to nest there. Little remains of that legacy apart from tourist attractions with turtle-themed names.

The eggs appeared to be viable, but after the expected hatching period, a look inside revealed the albumen was watery. This indicated they had never been fertilized, Mr Somporn said.

Kongkiet Kittiratanawong, a researcher at the Phuket Marine Biological Center (PMBC), agreed with this assessment.

The failure of the eggs to hatch had not been caused by volunteers moving them to a safe location on the beach after they were discovered, he said.

The PMBC often incubates and raises hatchlings at its facilities at Cape Panwa, but not the highly pelagic leatherback, which does not do well in captivity, he told the Gazette earlier.

A similar clutch of unfertilized leatherback eggs was found at Mai Khao in 2004, he said.

Despite the disappointment in Phuket, it has been a good year for leatherback nesting along other parts of Thailand’s Andaman coastline.

More eggs were laid this nesting season than over the last five, with clutches reported at Thai Muang Beach and Koh Phrathong in Phang Nga, and Koh Lanta in Krabi.

Only the eggs at Thai Muang were viable however, with a 70% to 80% hatching rate.

Leatherbacks typically lay clutches of around 80 fertilized eggs together with 30 smaller unfertilized eggs. The incubation period is about 65 days.