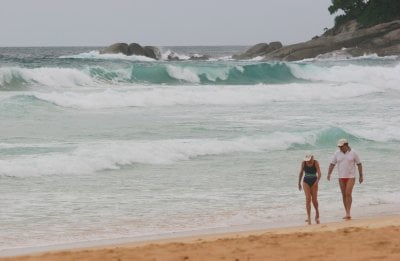 PHUKET: The Phuket Provincial Administration Organization (PPAO) plans to sign a 10-month contract with the Phuket Lifeguard Club that will see 83 lifeguards assigned to 13 island beaches by the end of the month.

Phuket Lifeguard Club President Prathaiyut ‘Nut’ Chuayuan said he was still waiting to see the contract and had yet to be contacted by PPAO officials, but looked forward to taking on the important job.

“I still need to review the contract before I sign it. If all goes well we can begin training soon, but I think it will be difficult to begin work by the end of the month,” he said.

“The PPAO budget allotment is quite small, which is why there has been so little interest in taking it on. But we need to think about society’s needs and that’s why I would love to try and help. The entire budget is about 10 million baht, which works out at 1 million baht per month. Of this, each of our 83 staff members would earn 10,000 baht per month,” he said.

“Compared to overall expenditure I don’t understand why so little is allotted for such an important safety concern, but if all goes well under the new contract we should have good lifeguards and a good beach safety regimen in place in the future,” he said.

“I may ask jet-ski operators to help us as well,” Mr Prathaiyut said.

A reliable source in the PPAO confirmed that the two sides were nearing a deal and hoped to have lifeguards back on the beaches by the Songkran holiday next week.

“We are still awaiting written confirmation from the committee of which of the two bidders will be offered the contract,” he said.

A source at Anda Focus Company, the other bidder, said it had not been contacted by the PPAO and believed Phuket Lifeguard Club would get the contract.

The source at the PPAO declined to confirm this, however.

The issue was still under review, but the council expected to have the beaches manned by lifeguards before the end of the month, the source said.

The 13 beaches will be divided into two zones with 28 lifeguard stations as follows:

In a related development, a Hawaiian water safety expert has released findings of a study showing that surfers have rescued hundreds of swimmers over the last three monsoon seasons in waters off the Andaman Coast.

Steven A. Martin, an instructor at Prince of Songkla University Phuket Campus, has documented 232 rescues of swimmers by surfers, both residents and tourists. The actual number of lives saved by surfers is probably far higher, he said.

For further details of the study, see the upcoming issue of the Phuket Gazette on newsstands from Saturday.