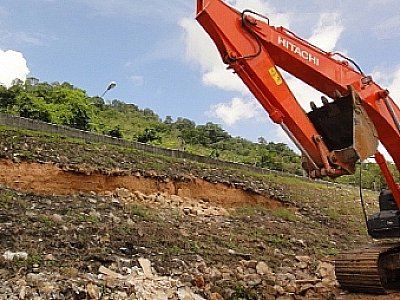 PHUKET: One westbound lane of the road over Patong Hill will remain closed to traffic indefinitely as authorities survey the damage of a recent landslide and draw up plans to stabilize the slope before the situation worsens.

“The [slow] lane will remain closed because it is still dangerous, as we can see from the crack. It could collapse if many heavy vehicles were allowed to pass over it,” he said.

The damage is the result of a landslide on Wednesday last week that toppled several power poles and caused a long fissure along the road, which was recently resurfaced and properly marked with road lines for the first time in years.

When repairs would be conducted depended on the rain, Mr Arun said.

“It should be fine if it remains dry like it is today,” he added.

Unfortunately, the 24-hour forecast for the period beginning at noon today calls for scattered thundershowers covering 60% of the area and isolated heavy rain.

The top of Patong Hill is not only a natural drainage divide between the west of Kathu and Patong, but due to its high elevation often serves as a barrier to passing storm clouds.

At many times of the year heavy rains can be seen falling on one side of the divide, while the other remains dry.

At this time of year the Patong side of the hill is more likely to be soaked by downpours due to the onshore monsoon winds from the southwest. The damaged road is on the western Kathu side.

In other Phuket landslide news, work is already underway repairing a section of a large concrete retaining wall built to hold back the earth supporting the bypass road’s northbound lanes.

The section of the retaining wall collapsed during heavy rain over the weekend, exposing more soil to erosion.

There was also a small slide uphill, visible to motorists heading north near the “bypass waterfall”. (Click here for a map of the affected areas.)

The northbound lane was the last section of work completed on the bypass road several years ago. It is also the road’s highest in elevation.

Blasted out of the Phanturat Hills, the road finally opened to traffic in March 2006.

Phuket Police to send body of fallen tourist to Bangkok