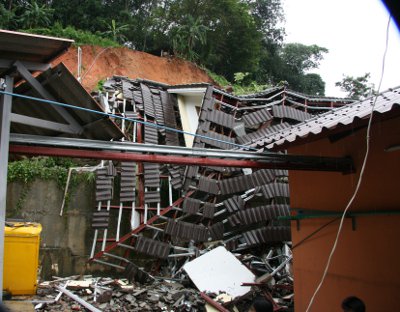 PHUKET: Heavy rains in Phuket today caused a landslide that plunged a house in Kathu, in central Phuket, down a slope, over a small retaining wall, and onto an industrial laundry nearby.

Luckily, no people were in the house at the time of the landslide and no people working in the laundry below were injured, Mr Narachai added.

“At about 10am, dirt and rocks slid down the hill, pushing the house toward the factory,” he said.

The house toppled over a retaining wall and collapsed into a space between the wall and the laundry’s main building.

“The house was destroyed. Some of it fell onto the laundry and some of it onto our two Isuzu pickup trucks and a motorcycle,” said Mr Narachai.

“He asked me to file a complaint with Kathu Municipality to see if they can help. For now, they are helping us to clean up the mess,” Mr Narachai said.

“I have talked to Kathu Municipality’s Civil Engineering Department to find a permanent solution to prevent future landslides.

“In the meantime, we are looking into installing a [bigger] retaining wall as a temporary measure,” Mr Narachai said.

“We have house insurance, but it does not cover natural disasters, so I have to deal with this on my own,” he added.