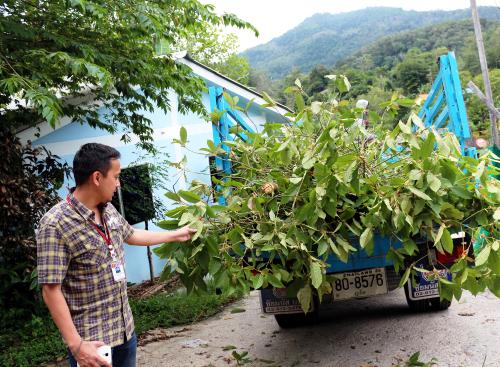 PHUKET: Police yesterday afternoon raided a property in Patong, on Phuket’s west coast, and cut down about 20 kratom trees.

The orchard owner, named by police as Sathit Jaihaw, 37, had about 20 big kratom trees growing on his property, and in his house police found three small packages of harvested leaves pre-packed for sale.

Kratom leaves yield an illegal mild narcotic, and are chewed, brewed in tea, or used in the popular party cocktail “4×100”, which is created by mixing an extract from the leaves with cough syrup, cola and ice.

Patong Police Deputy Superintendent Somsak Thongkliang led 10 chainsaw-wielding officers to the loaction, and the trees were cut down and removed in the back of a truck.

“We received a report from our undercover officer that the property was being used for growing and storing kratom, for the purpose of selling the illegal product to laborers,” Lt Col Somsak told the Phuket Gazette.

Mr Sathit confessed, “I harvested the leaves and sold packages of 30 leaves for 100 baht to laborers. I’ve been doing this for 10 years.”

He has been charged with the possession, sale and distribution of a class 5 narcotic.

Recently the Office of the Narcotics Control Board (ONCB) responded positively to the proposed legalization of kratom, which is currently on Thailand’s narcotics list (story here).

The ONCB will be meeting with the Food and Drug Administration, the Public Health Ministry and the National Police Office next week to discuss whether kratom should be removed from the list. Thailand is the only country at present that designates kratom as an illegal narcotic substance.