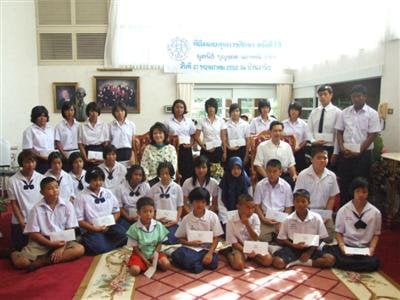 This event took place at the Vanich Estate on Thepkasattri Rd in Rassada.

The scholarships were presented to the lucky recipients by foundation vice-presidents Anchalee Vanich Thepabutr and her brother Apirak Vanich.

Mrs Boonrod co-founded the scholarships in 1996, after her husband Ekapojna passed away in 1992.

Since its inception the foundation has provided a total of 883,200 baht in scholarship funding.

This year’s scholarships, ranging from 2,000 baht to 5,000 baht, were awarded to needy students studying at primary education level through to university.

Students in schools run by the Education Ministry and local administration organizations were among the recipients, as well as two students enrolled in private schools.

Of the two 5,000-baht scholarships, one went to a Rajabhat Phuket University student and the other to a student at the Prince of Songkla University, Phuket Campus.

Ms Anchalee said the sole objectives of the foundation are to provide poor students with a chance to get a good education and to promote cultural awareness.

The Boonrod Ekapojana Foundation is ready to join with other charitable organizations to work on public benefit projects, she said.

As a foundation, the organization is strictly forbidden to engage in political activities, said Mrs Anchalee.

The foundation enjoys the support of one of the island’s wealthiest clans.

When the asset declarations of Phuket’s three MPs were announced in March 2008, Anchalee’s husband Tossaporn Thepabutr was listed as the second-richest member of the Thai parliament, with combined family assets of more than 963 million baht.

Mr Banharn, a former prime minister, had over 1bn baht in declared assets at the time.