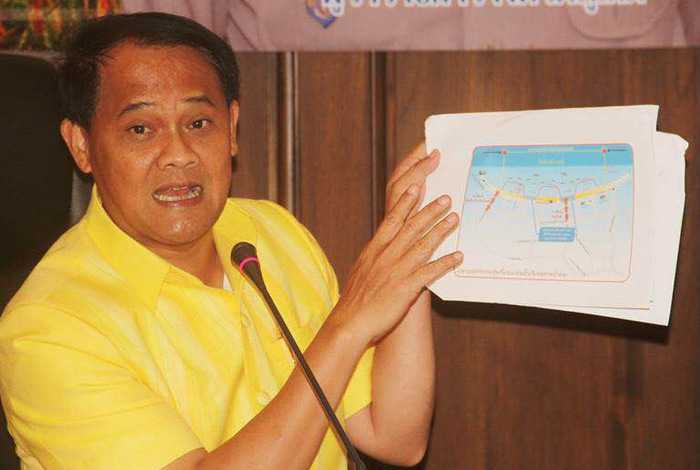 PHUKET: Governor Nisit Jansomwong has revealed a raft of new rules for jet-ski operators to abide by when renting their jet-skis out to tourists at Phuket beaches.

“Jet-ski operators who do not follow the rules will be punished,” Governor Nisit assured the media at a press conference held at Phuket Provincial Hall yesterday.

“The new rules will first be enforced at Patong. We will later introduce them at Kata-Karon and other beaches in Phuket, and even on other islands in our jurisdiction, such as Naka Island [off Phuket’s east coast].”

“There will be only two areas, each about 300 meters wide, where jet-skis and parasail boats may approach the beach,” he said.

Jet-skis and parasail boats will not be allowed more than one nautical mile offshore, with Patong Municipality to set up two red buoys to mark the outer reaches of the jet-ski and parasail boat zone.

“For safety, all jet-skis and parasail boats that are not approaching or leaving the beach must be operated at least 300m from shore,” Governor Nisit added.

The provincial order signed by Governor Nisit stipulated that:

1. All rental jet-skis are registered
2. All rental jet-skis are covered with first-class insurance
3. All tourists renting jet-skis must sign a rental agreement, and all operators must have agreements in at least Thai, English, Russian and Chinese
4. All operators must publicly display rental rates, and the rates must be same among all operators
5. All tourists are taught how to operate a jet-ski
6. All people operating jet-skis must wear life jackets
7. All jet-skis must have engines of 130hp or less
8. All jet-skis must display a sticker issued by the Marine Department and be operated only at locations specified by the local government administration authority
9. No fuel or oil is to be added to any jet-ski on the beach or in the water
10. The owner of a jet-ski must have all appropriate licences and certificates
11. Jet-skis must be operated only in designated areas
12. Jet-skis must not be operated under the influence of alcohol
13. Any accidents must be reported to the officer responsible for the area where the accident occurred: Nucha Phetwimon in Patong; Jirawut Wirakarn in Kata-Karon; Watchara Koysakul in Kamala; and Ekkachai Thongyon in Bang Tao.

The four officers will also be responsible for deciding whether or not jet-skis are to continue operating in foul weather at their respective beaches.

The provincial order stipulated that the Marine Department retains the right to revoke the licence of any operator found breaking the rules.

Phuripat Theerakulpisut, chief of the Phuket Marine Office, had previously allowed jet-ski operators to continue renting out jet-skis at Phuket beaches, while all other beach vendors have been forced out of work under the National Council of Peace and Order beach cleanup campaign (story here).

Girl remains in ICU after truck crashes into Phuket sinkhole