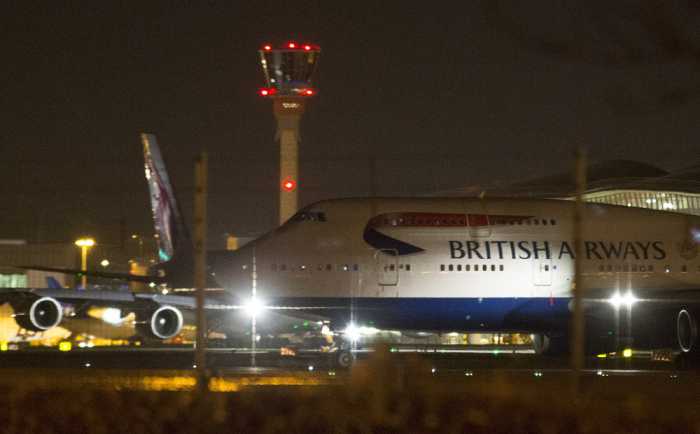 PHUKET: Hundreds of flights to and from London were disrupted on Friday by a technical failure at England’s main air traffic control centre, which a senior government minister said was “simply unacceptable”.

Flights in and out of Heathrow, which calls itself the world’s busiest international airport, were halted for at least an hour, causing knock-on effects across Europe.

Heathrow said operations were beginning to resume, but there were also cancellations and delays at other London airports.

Transport Secretary Patrick McLoughlin demanded a full explanation for the glitch that forced authorities to limit access to British airspace at one of the busiest times of year.

A government source, speaking on condition of anonymity, told Reuters the problem did not appear to be linked to any security threat to the United Kingdom.

It was the second such incident in just over a year to hit the National Air Traffic Service’s hub at Swanwick in southern England, one of NATS’s two main centres. NATS’s other centre is in Prestwick, Scotland.

Last December, thousands of travellers were delayed at airports across England when the night operating system at Swanwick failed properly to switch over to daytime mode.

NATS said late on Friday its systems were fully operational again and that it was still investigating the cause of the disruption. It denied media reports that a power outage was responsible.

McLoughlin said in a statement: “Any disruption to our aviation system is a matter of the utmost concern, especially at this time of year in the run up to the holiday season.

“Disruption on this scale is simply unacceptable and I have asked NATS for a full explanation of this evening’s incident.”

As Heathrow is a major hub for international transfers, the disruption will be felt far beyond Britain. More than 67 million passengers travel through the airport annually on services offered by 90 airlines to over 180 destinations in more than 90 countries, according to its website.

One passenger at Heathrow, Deirdre Poole, 39, said she did not know if she would be able to return home to Geneva after her flight with Swiss International Airlines was cancelled.

“It’s ridiculous and it’s rubbish really,” she said. “There’s a massive queue … and it is all a bit of a limbo.”

Gatwick, another major airport south of the capital, said flights were also departing with delays, as did Stansted, London’s third airport to the north.

Airports in Birmingham and Manchester, in central and northern England, said they had been unaffected by the airspace closure and were ready to accept diverted flights.

British Airways said it would offer refunds to passengers who did not wish to travel.

Mikael Robertsson, co-founder of plane tracking site FlightRadar24, said it was very unusual for hundreds of flights to be diverted at the same time during the Friday afternoon travel peak.

“I can’t remember when I saw last something similar. For sure this will affect many thousands of travellers around Europe and the whole world,” he said.