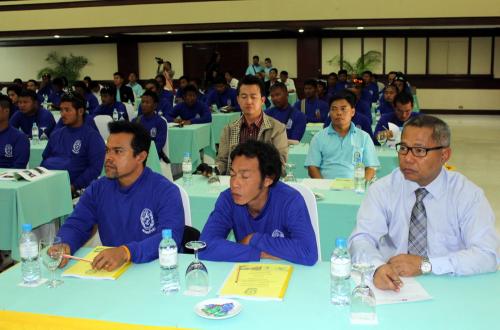 PHUKET: Complaints about jet-ski operators filed by tourists holidaying in Phuket have prompted the island’s authorities to launch a two-day seminar aimed at educating the operators about charging fair prices and being polite.

Tourist complaints about jet-skis reached such a level that Qin Jian, Vice Consul of the Consulate-General of the People’s Republic of China, based in Haad Yai, lodged a formal complaint earlier this year, leading to a formal investigation into jet-ski rip-offs by the Tourist Police (story here).

The jet-ski issue was also one of four topics on the agenda of EU Ambassadors when they met with Gov Maitri in June (story here).

In response, Phuket Governor Maitri Inthusut yesterday officiated the start of a two-day seminar aimed at encouraging jet-ski operators to provide better service to tourists and to improve safety.

He encouraged the operators to be polite, to charge fair prices and to prioritize safety, and reminded them that the reputation of Phuket was in part their responsibility.

Kathu District Chief Veera Kerdsirimongkol was also present – 170 of Phuket’s 286 registered jet-skis operate from Patong Beach – as were the Director of Marine Office Region 5 and the head of the Phuket branch of the Marine Office, Phuripat Theerakulpisut.

“We called in the jet-ski operators today to remind them to operate according to the law and to follow high standards of service in order to impress tourists so that they come back to visit Phuket again,” Mr Phuripat said.

Though one goal of the seminar was to decrease the number of tourist complaints about jet-ski operators, Gov Maitri noted that there had been only one jet-ski problem reported in the past 10 months, and that had been resolved between the two parties.

In addition to the 170 jet-skis at Patong Beach, there are 40 registered to operate at Bang Tao, 38 at Kata-Karon, 26 at Kamala and 12 on Naka Island, Gov Maitri said.