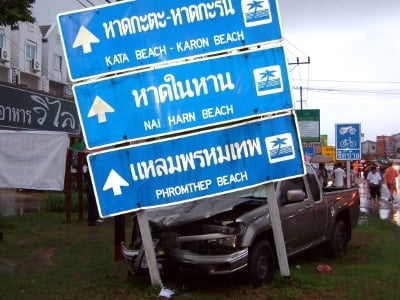 PHUKET: A young couple on a motorbike died instantly in a head-on collision with a pickup truck in Phuket this morning.

Police are now seeking the driver, who abandoned the wrecked vehicle at the scene and fled on foot.

Arriving at the scene on Chao Fa East Road in Chalong shortly after 6am, officers found the bodies 28-year-old Prasertsri Panchanan, from Maha Sarakham province, and Marisa Sawangyen, 22, from Nakhon Sri Thammarat.

Both had suffered massive head trauma and other injuries.

Crashed into a large road sign nearby was the pickup, bearing Udon Thani license plates.

Witnesses said Mr Prasertsri was riding southbound toward Chalong Circle with Miss Marisa riding pillion when they approached the scene of an accident involving two motorbikes.

In order to avoid the vehicles and injured people in the road, Mr Prasertsri apparently steered into the oncoming lane.

His motorbike collided head-on with the pickup, which then crashed into the roadside sign.

Both the driver of the pickup and a passenger with him immediately fled on foot.

They are now sought by Chalong Police.