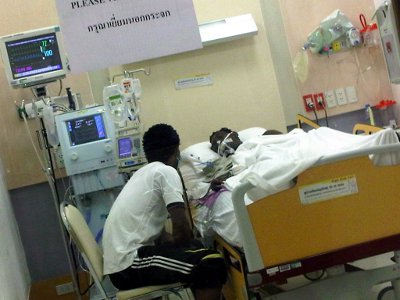 Camara, from the Ivory Coast, collapsed on field from a heart attack at Surakul Stadium on Saturday during the FC Phuket match against Chainat FC.

He was revived en route to hospital, but has been in a coma since.

The vigil tonight will be held in the car park at Phuket Bangkok Hospital, starting at 7pm.

“His fans are invited to join the event. After the ceremony, which will include Buddhist prayers, the team will go up to Bangkok to play Bangkok FC. The show must go on,” said FC Phuket administrator Kazi Hans.

“Camara’s condition has remained the same. His pulse is normal, but the doctors are closely monitoring his condition,” she said.

“We are also coordinating with his family. His mother is currently awaiting visa application approval so she can come to see him.”

For his own protection doctors are denying almost all non-medical people from seeing Camara, who remains in intensive care.

“His fans and football friends keep arriving to visit him, but the doctors will allow only relatives and close friends to enter the ICU,” said Ms Hans.

Camara’s brother has arrived in Phuket and is now at the hospital, she added.

“They are concerned that his condition might deteriorate if he contracts an infection,” said Ms Hans.