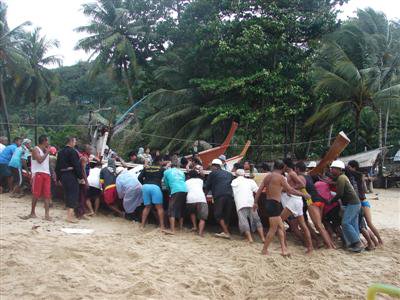 PHUKET: Wind-driven waves damaged seven longtail boats anchored in Bang Tao Bay this morning, but it looks as if Phuket has been spared serious damage from the tropical depression that has ravaged other parts of the South in recent days.

After receiving a report that the effects of the tropical depression passing over Phuket would start to be felt at 3am, over 100 small boat owners moved their vessels to safe anchorage at Ao Reang, near the Amanpuri resort.

Not all of the vessels could be moved in time, however, and at least eight longtails and small fishing boats sunk in Bang Tao Bay.

By about 5am, waves as high as four meters had caused most of the remaining boats to break anchor and run aground in the surf line at Bang Tao Beach.

A team of villagers assembled in the darkness to help salvage the remaining boats, which quickly filled with sand and water.

The team was able to manually bail out the sand and water from seven longtails and small fishing boats, then manually push them far enough ashore to prevent further damage.

One capsized boat remained about 20 meters offshore, its anchor line preventing it from beaching. Cherng Talay Administrative Organization Vice President Decha Sarae, one of the many local leaders involved in the effort, said its anchor line would have to be cut before it could be recovered.

Seree Soison, president of the Bang Tao Longtail Boat Club, said all of the damaged boats had just put to sea 15 days ago following extensive repairs and repainting so that they would be ready for the upcoming high season for tourism.

He estimated engine repair work alone would cost about 15,000 baht per vessel.

Workers from the Disaster Prevention and Mitigation Section of the Cherng Talay Tambon Administrative Organization were also involved in this morning’s effort.

The latest 24-hour forecast for Phuket from the Meteorological Department calls for scattered thundershowers over 60% of the province and isolated heavy rain. The report, issued at 5pm, seems to indicate that the worst effects from the depression have passed.

The previous report, issued at noon today, called for “fairly widespread thundershowers covering 80% of the area and isolated heavy rain”.

The last weather advisory from the Meteorological Department in Bangkok had the system centered over Phang Nga at 3pm today.

At that time the system still had a sustained wind of about 45kmh and was moving west-northwest at a speed of 15 kmh toward the Andaman Sea, where wave heights of up to five meters were predicted.