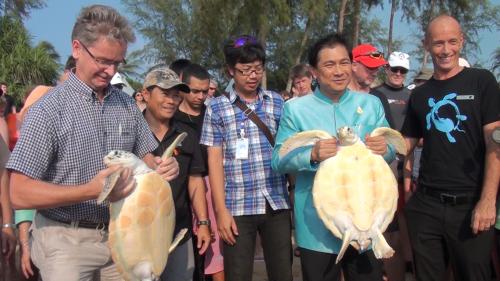 The important annual event is organized to raise funds for, and awareness of, the plight of Phuket’s critically endangered sea turtles.

Supported by the Phuket Marine Biological Center and the Royal Thai Navy, the event released rehabilitated green turtles back into the Andaman Sea.

Phuket Governor Maitri Inthusut gave a speech, highlighting the importance of the Mai Khao Marine Turtle Foundation, before releasing the first turtle to scuttle across the sand.

In total, about 100 turtles were released.

Phuket’s sea turtles face multiple threats and their numbers have been severely depleted in recent years. Commercial fishing kills thousands of them every year. Many more die from eating or becoming trapped in plastic debris littering the ocean, not to mention entanglement in fishing nets and being hit by speedboats.

One dead, two thrown from car as workmen head to Phuket Airport