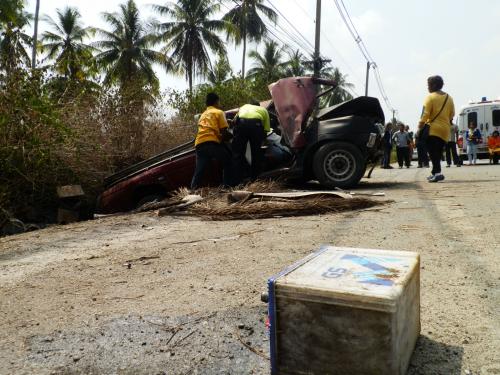 PHUKET: One man is dead and two are lucky to be alive after the pickup they were travelling in skidded on oil and struck a power pole on Phuket’s Thepkrasattri Road, at the north end of the island, this morning.

The three men, all steel workers from Takuapa in Phang Nga, were on their way to work on the expansion project at Phuket International Airport.

Police arrived to find Chamroon Khumsa-ard, 71, dead inside the car.

Somjit Lanwong, 43, and the driver Somporn Pimtien, 34, were still lying on the road after apparently being thrown clear of the vehicle.

“They both had cuts on their head. Mr Somjit had scratches and bruises over his body. Mr Somporn suffered a broken arm. They were taken to Thalang Hospital,” Col Prakorb explained.

“According to Mr Somporn, he and his two friends left the shop [where they worked in Phang Nga] to work at Phuket Airport.

“Mr Somporn said he was not driving very fast. However, the pickup spun out of control when when it passed through the oil on the road,” he said.

“The pickup spun, hit the power pole and kept spinning off to the side of the road. None of them were wearing seat belts. He [Mr Somporn] and Mr Somjit were thrown out of the car,” Col Prakorb explained.

Mr Chamroon, who was sitting in between Mr Somporn and Mr Somjit at the time of the accident, slammed into the dashboard.

“He died at the scene,” Lt Col Prakorb said.