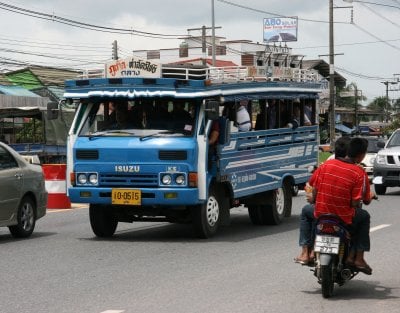 “Since [the campaign was launched on] July 1, people in Phuket Town have been more aware of the importance of wearing helmets. Now we rarely see motorcycle riders and passengers without helmets, so I am expanding this campaign to come into force across all of Phuket.”

He assigned the superintendent at each police station on the island to set a team up to promote the campaign and inform residents of the impending crackdown.

The teams will also ask private and government organizations in their areas to support the campaign by donating helmets.

From January 1, the punishment for passengers found riding without a helmet will be the same as for those in town: First-time offenders must watch the mandatory road-safety and traffic law film.

From July 1 next year, repeat offenders – at least those in Phuket City Police District – will be fined.

Maj Gen Pekad called for universal support for the campaign. “It will set a very good example for other provinces to follow,” he said.

In Patong, campaign posters featuring Kathu Police Superintendent Arayapan Pukbuakao and Kathu Traffic Division Inspector Jakkawat Boontawegunsawat, both wearing helmets while sitting on a motorcycle, have been posted throughout the municipality.

“We are drafting an MoU [memorandum of understanding] for private and government agencies and community leaders to sign to acknowledge and support the crackdown next year,” Col Arayapan said.

The MoU being drafted aims to have organizations introduce separate punishments for their own staff caught breaking the law.

Such measures have already been introduced at several businesses and schools on the island, including at Prince of Songkla University Phuket campus in Kathu last month.

At Chalong Police Station, Superintendent Wichit Intorrasorn said, “We launched our public awareness campaign today [September 30], with messages broadcast on radio, printed in newspapers and on websites, and on wooden cutouts of police officers placed along roadsides throughout the area.”

From January 1, first-time offenders in Chalong will have to watch the mandatory road-safety film, but a date had yet to be set for when the fines will be introduced, he added.

Tah Chat Chai Police Superintendent Sakchai Limcharoen said, “Our campaign banners are being made right now, but we have already started warning motorcycle riders and passengers passing through the Tah Chat Chai checkpoint that the crackdown is coming.”

Meanwhile, Thung Thong Police Superintendent Kraithong Chanthongbai said his district will not make up posters promoting the campaign, but will set up road checkpoints to warn motorbike riders and passengers found without helmets about the impending crackdown.

Phuket poll: Price-fixing not the answer to hotel price war