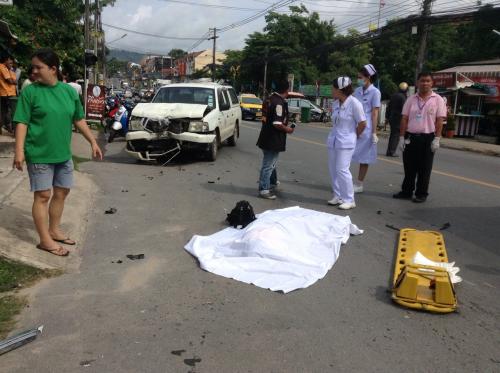 PHUKET: Two sisters were killed this morning when a car belonging to the Phuket Provincial Electricity Authority (PPEA) collided with the motorbike they were riding.

The motorbike driver, Warangkana Angsakul, a 51-year-old teacher at Muang Phuket Municipal School, died instantly as a result of the impact.

Her 47-year-old sister who was riding with her, Mantana Angsakul, was seriously injured and swiftly transferred to Vachira Phuket Hospital, Phuket City police told the Gazette.

“The driver of the PPEA vehicle, Peeraroj Jinowat, was not injured. He was on his way to the PPEA office in Phuket Town,” said Lt Jariyawat Taencheun of the Phuket City Police.

“Apparently the driver sped up to overtake, but he did not see the motorbike, which is why the impact was so strong. The skid marks from the PPEA vehicle stretched for about 10 meters.

“However, he was in a part of the road where overtaking is prohibited, and this was clearly indicated by a solid line,” Lt Jariyawat said.

“Mr Peeraroj surrendered to the police, and was charged with reckless driving causing death,” he added.

Police on lookout for Toyota in Phuket shop hit-and-run