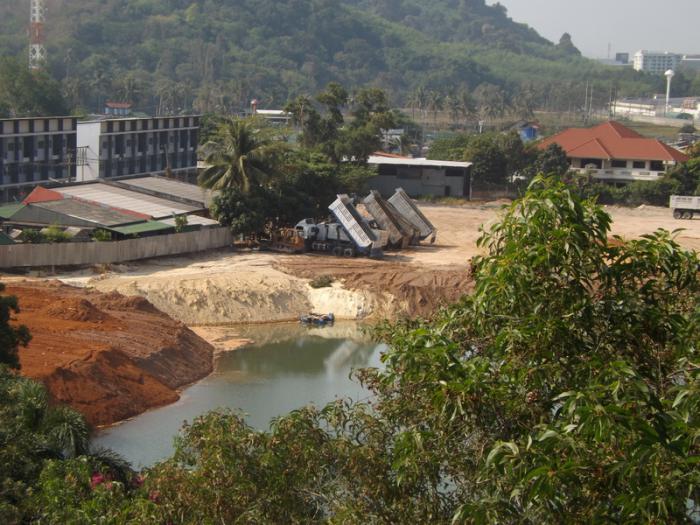 PHUKET: Governor Maitri Inthusut yesterday lent the weight of his office to the investigation of a lake-filling project in Samkong with the aim of assisting Rassada Municipality to file a police complaint.

The project, at Srisuchart Grandview housing estate, began as a municipality-ordered anti-erosion measure at the lake, but has become a noisy, dusty public nuisance and health threat, according to residents (story here).

Six government offices were tasked with investigating land titles, company documents, legality of the lake-filling, impact on the environment and on local residents, and whether the lake is in fact a lake or an old tin mine.

“Right now, no one knows exactly what laws to enforce to rectify the lake-filling situation,” said Vice Governor Somkiet Sangkaosuttirak.

All information will be submitted to the Rassada Mayor, who has the authority to file the complaint.

“Our action follows numerous complaints made by residents and business operators about the effects of the lake-filling, such as noise during the night, damage to the road from the heavy trucks and smoke and dust causing illness,” said Governor Maitri Inthusut.

The six departments and their areas of investigation are:
The Ministry of Natural Resources and Environment (MNRE) Phuket: the project’s environmental impact.Public Works and Town & Country Planning Phuket Office (DPT-Phuket): legality of the land-filling.Phuket Industry Office: whether or not the lake is an old tin mining site.Phuket Provincial Land Office: land titles.Muang Phuket District Office: the project’s effects on nearby residents. Rassada Municipality: documents filed by Srisuchart Grandview Co Ltd