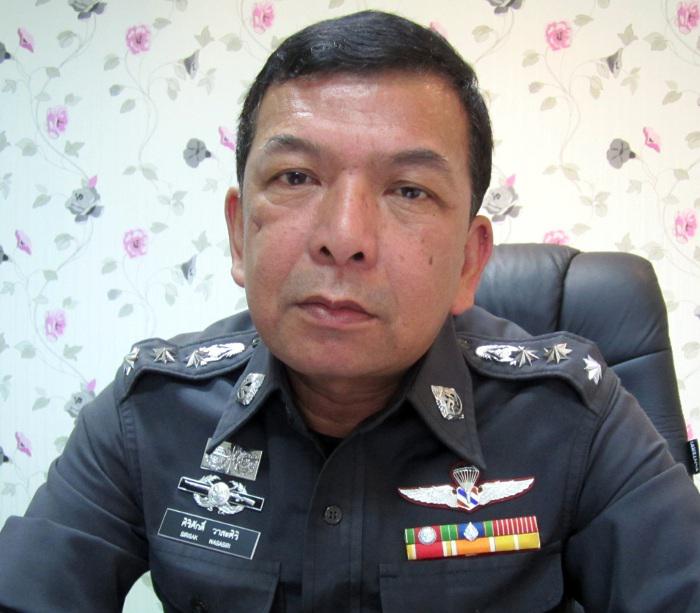 PHUKET: Officers of the Chalong Police have found themselves under tight scrutiny from their new chief, the recently reinstated superintendent Col Sirisak Wasasiri, following a blockade of the police station on Monday.

All officers must now provide daily reports of their activities, inform Col Sirisak each time they leave the station on police work and provide the results of their efforts when they return.

“I know the problem stems from poor control of the officers,” Col Sirisak told the Phuket Gazette.

“I have repeatedly reminded them they are to cause no harm to the people they swore an oath to protect. We are to help as fast as we can to bring justice to the people in our community.”

Col Sirisak’s tight grip on officers at Chalong follows the blockade of the police station by an aggrieved family just one week after his return as superintendent. Col Sirisak was reinstated on April 1 after former Chalong Superintendent Krittapas Dazintharasorn was ordered out, pending an investigation into claims that Chalong Police officers were extorting cash from dive operators (story here).

On Monday, Col Sirisak faced the family, which used a minivan and two cars to block the police station, preventing any vehicles from entering or leaving the premises (story here).

Posters accusing officers of “supporting murder” has been plastered on billboards in front of the station which promote the island’s leading police officers with the slogan, “Police for People”.

The protest was staged because of lack of progress by the Chalong Police in apprehending a suspect wanted for a fatal hit-and-run nine months ago in which Surachai Taweesin, 59, was killed.

The family vowed that the blockade would remain in place until the owner of the pickup truck that struck Mr Surachai dead offered cash compensation (story here).

“I want to end the problem, as the vehicle is mine. If possible, I would like to pay the full amount at 1pm on April 12 at Chalong Police Station,” said Moo 1 Chalong Headman Pradit Ongsatiparp.

“The driver was working for me for only two days. I do not have his identification card. I do not know where he is.”

Phuket Provincial Police Deputy Commander Pinit Sirichai, who met with the family to negotiate on Monday, said that Chalong officers have been ordered to conclude the case as soon as possible and send a report to him within one month.

Following Col Pinit’s order, Col Sirisak assured that closing cases would take a higher priority than it had before his return.

“If an officer cannot close a case quickly, I will assign more officers to assist,” he said.

“If cases are closed quickly, people will be satisfied with our work and I think there will be no more problems from people claiming that the police shirk their responsibility.”