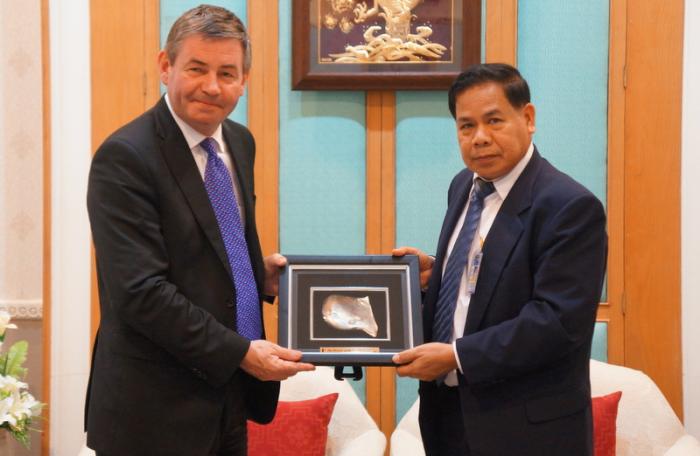 PHUKET: The province is forging ahead to develop ‘smart city’ status with a 430 million baht initiative launched earlier this year.

Deputy Prime Minister Somkid Jatusripitak gave the green light on March 21 to launch the pilot project. “The Thai government had been developing a smart-city concept, focusing on information-technology systems, which would become the foundation for the economy, society and tourism,” Deputy PM Somkid said.

The same day, Phuket Governor Chamroen Tipayapongtada and the mayor of Busan, South Korea, inked a deal to adopt digital technologies already in use in some of South Korea’s smart cities.

The minister initially announced the idea of turning Phuket into a ‘smart city’ in September of last year, concentrating on environmental concerns, investment-friendliness and tourist safety.

Plans for a 10-billion-baht digital real estate development, billed as a ‘digital-business hub with a view’ in Pa Khlok were revealed last December as part of a joint government-private sector venture aimed at attracting global technology giants, such as Microsoft, Google, Alibaba, Samsung and Facebook.

Deputy PM Somkid said that special privileges would be afforded to foreign investors looking to establish their businesses in Thailand’s new special economic zones. He added that the government would support Thai investors in negotiations with those foreign investors.

UK TID Technology Specialist John Griffiths said he was enthusiastic about the opportunities for Phuket to adopt inexpensive hardware and software solutions from the UK’s tech industry, when he met with officials at Provincial Hall on June 3.

One of the products of particular interest to provincial heads at the meeting was sensor technology from British-based tech manufacturers.

“If you wish to pick up and use data, traditionally you would go to a mobile operator and say, ‘I have a SIM card and would like you to transfer this data to my server.’ That’s a relatively low-cost option for about 250 baht per month to gather data and send it through,” Mr Griffiths said. “But cellular data is restricted by the cellular network. If you have no signal, you have no sensor.”

Mr Griffiths said he was eager to set up a data-collecting and analyzing system, called Laura, in Phuket, as a part of the smart city development project.

“Laura is a free-to-air spectrum that is close to an FM radio signal, meaning that the signal can penetrate buildings,” he explained. “It can run continuously for four to five years with a small battery.”

Mr Griffiths estimated that the infrastructure requirements for a system of sensors across Phuket would be about five radio masts, each with a 7km radius that could transmit data from up to 50,000 nearby sensors.

“It’s basically 100 times cheaper than a cellular network,” he said.

“The system would allow real-time measurements of things like water levels and water quality. You could have an interactive refuse collection system, which notifies you when bins are full and ready to be collected,” explained Mr Griffiths. “For example, sensors powered by small batteries or solar cells at intersections could measure carbon monoxide levels, and that, is your ‘smart city’.”
The data from the sensors can then be collected and analyzed.

“You may have companies that want to make a traffic app, or the local government could free up that data and have local companies doing a variety of things with that data,” Mr Griffiths said.
“In the UK, we have a hospital that has to check 9,000 water taps every day. That’s a job that usually requires two staff members and a manager,” he said. “But, with Laura, you can have sensors on each tap, doing the job of those three employees.

Marcus Winsley, Director of Trade & Investment at the British Embassy in Bangkok, said the solutions offered by technology like Laura, provides people and governments with data that allows them to improve their efficiency.

“We are here because we are excited about the ambition that the Thai government has to move up the curve of innovation, to become sustainable and environmentally clean,” Mr Winsley said.

“We believe there are technologies and solutions to issues, held by British companies and experts, that directly meet the needs of Phuket, all while building partnerships.”

“Phuket is an ideal location to develop as a smart city; as an island, you can control the system better. Also, Phuket is a fantastic base of tourism, which lives on data. There are lots of ideas which British companies can share that would be useful for Phuket.”

“My concern is with environmental issues in Patong, like flooding, air pollution and waste management. I’d like to see technology implemented that can detect water levels so we can issue timely flash flood alerts,” said Mayor Chalermluck.

“Patong is an old town. It was once a small village and now it’s a heavily populated tourist destination. Our infrastructure was not built to support such rapid growth. We have small pipes, yet more buildings are going up all the time. This is an ongoing problem which affordable technology can help solve.”

“These problems cannot be solved by the city alone,” she said. “Sensors would be useful along the canals running through Kathu, Wichit and Rassada.”

Vice Governor Prajiad Aksornthammakul said he was keen to use the British technology to address island-wide security issues.

“CCTV and other technologies could be used to screen people entering Phuket at a ‘gateway’ onto the island, and at piers. There, we could gather information about our visitors,” he said. “This is a good start for Phuket in becoming a smart city, and we welcome the British government’s involvement and support.”

Pracha Asawateera , Phuket branch manager of SIPA, believes Phuket has excellent potential to compete as a smart city against neighboring technology hubs, like Singapore and Malaysia, but admitted that a priority is increasing the province’s internet speed.

An additional 1,000 CCTV cameras to monitor traffic are also among the smart city plans for Phuket, ostensibly in order to curb traffic violations.

Samkong traffic to be redirected for underpass work