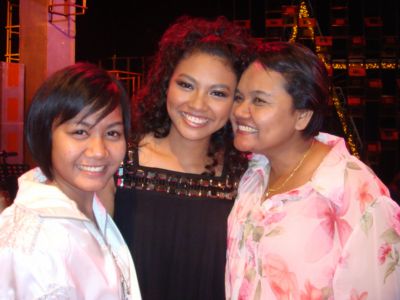 The final round of competition, televised nationally on Channel 9, was held last night at the full-to-capacity Hua Mark Indoor Stadium in Bangkok.

The pair were the last two standing following months of televised competition that started with a field of more that 16,000 amateur talents, all hoping to make a name for themselves in the show, which last night completed its fourth year.

In the final round of voting that closed during the show last night, mobile phone users nationwide overwhelmingly endorsed Nong Kam, who at 11 pm was announced the winner with 61.2% of the vote, vs 38.8% for runner-up K. Ruj.

The final round, which got underway at 9 pm, also featured the singing and dancing talents of the other eight quarter-finalists.

Nong Kam is a Satree Phuket School graduate who began singing as an eight-year-old primary student at Samkong School. She honed her vocal talents by taking classes at the Siam Kolakarn Music School.

She has also been featured on the popular At Ten weeknight variety talk show on Thai TV Channel 3.

As this year’s winner, she will now go on to record her first album under the GMM Grammy label.

Nong Kam hopes to follow in the footsteps of her own singing idols, American crooner Beyoncé and Thai music sensation Jennifer Kim.

After winning, Nong Kam thanked everyone for their support, especially her mother Yada, managing nurse at the patients’ referral section at Bangkok Hospital Phuket, which is still abuzz with last night’s victory.