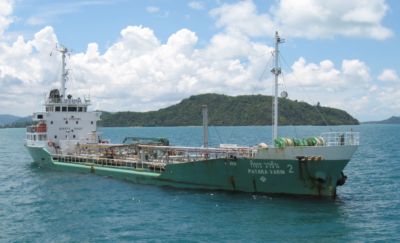 CAPE PANWA: A fuel tanker on its way to Phuket was boarded by six masked men in the Singapore Strait early Friday morning, the pirates making off with more than half-a-million baht in goods stolen from the vessel and its crew.

News of the incident was reported to the Phuket City Police soon after the tanker, Patara Varin 2, reached the Phuket Deep Sea Port about 10 am yesterday.

According to Rear-Admiral Supot Pruksa of the Third Naval Area Command, Patara Varin 2 was on April 21 ordered to transport Jet A-1 fuel from the ARC oil refinery at the Mabtaput Industrial Estate in Rayong to the PTT oil storage facility at the Phuket Deep Sea Port at Cape Panwa.

After loading the fuel at 5:30 pm that day, Capt Pinit Rattanaphan reported engine trouble and spent the night moored at Mabtaput while repairs were carried out.

Patara Varin 2 finally left Mabtaput at 4:45 am on April 22, scheduled to arrive in Phuket about 7 am on April 27, after making the long voyage around Singapore and up to Phuket.

Just after midnight, in the early hours of April 25, Capt Pinit had relieved his deputy of command as the vessel began to enter the busy shipping lanes in the Singapore Strait.

While he was writing a security report, he heard a hatch open. He presumed it to be crew member Rattasart Intima returning to the bridge after a trip to the head, and thought little of it.

A few minutes later, he heard someone call out “Captain” in English.

When he turned to look, he saw ship mechanic Jaras Srimart handcuffed and being led onto the bridge at knife- and gun-point by two masked men.

After throttling down the engines at the pirates’ orders, Capt Pinit too was handcuffed – along with three other crew members who in turn came onto the bridge to see why the engines had slowed.

The six pirates soon had the full 13-member crew in cuffs and began searching every cabin for valuables while two more pirates waited alongside the tanker.

The pirates soon disembarked, racing into the darkness in their 20-foot speedboats, powered by twin 300hp outboards.

There were no injuries reported.

The entire operation lasted 45 minutes, during which the pirates made off with valuables estimated at 597,700 baht. Among the stolen items were cash, gold, 13 mobile phones, four notebook computers, two wristwatches and a CD player.

Among themselves the pirates communicated in Indonesian, Capt Pinit wrote in his report.