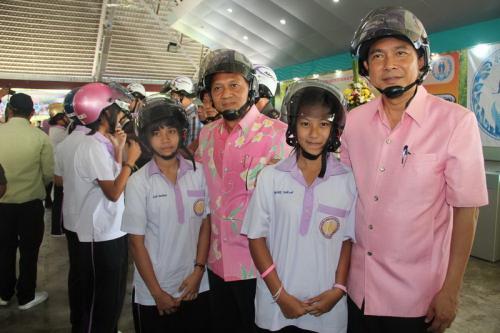 PHUKET: Phuket woke up to the first dawn of the annual “Seven Days of Danger” new year national road-safety campaign without recording a single death on the roads.

However, the first casualty recorded since the campaign began at midnight last night was a 33-year-old woman who crashed her motorbike at high speed on Sakdidet Road in Phuket Town at about 7am today.

“She sustained a serious head injury and was rushed to hospital. At this stage, that is all we know,” said Preeyaporn Torwong of the Department of Disaster Prevention and Mitigation Phuket branch (DDPM-Phuket), the central office for receiving reports of all accidents, deaths and injuries during the seven day campaign.

“We are also hoping to achieve our goal of not having more than 71 accidents and not more than 76 people injured during the new year holidays,” he said.

“To achieving that, police will set up 10 main checkpoints and 17 mobile checkpoints,” Gov Maitri explained.

“We expect to reduce the number of accidents by 5 per cent from last year,” he added.

During the campaign launch at the college, Governor Maitri along with Vice Governor Chamroen Tipayapongtada and other senior officials handed out 400 pink helmets and launched a motorcade of “safe riders” to encourage student motorbike riders and passengers to wear helmets every time they get on a motorbike.

“The aim of this campaign is to reduce the number of road accidents so people can have a safe, happy new year,” San Jantharawong, chief of the DDPM-Phuket office, said.

This year, the Seven Days campaign will conclude at midnight on January 2.