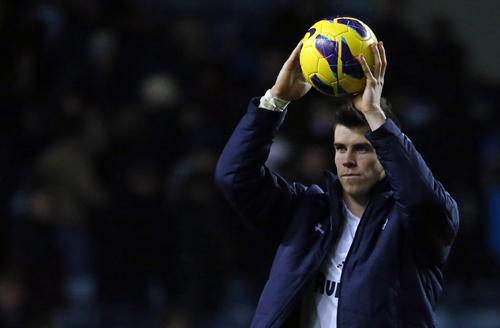 PHUKET: Tottenham Hotspur’s Gareth Bale is among the most special talents in world football, manager Andre Villas-Boas said after the left winger grabbed a hat-trick in yesterday’s 4-0 mauling of Aston Villa.

Jermain Defoe put Spurs in front in the 58th minute at Villa Park before Bale blew the home team away with goals in the 61st, 73rd and 84th minutes to take his tally to nine in the English Premier League this season.

Asked by reporters if there were any better players in the game than the Welsh international, Villas-Boas replied: “He is up there with the best.

“His finishing is very accurate. He has been prolific in front of goal this season and I think he is enjoying getting into those positions.

“His left foot is wonderful and the power and direction he applies on the ball is wonderful too,” added the Portuguese after victory lifted Spurs to fourth spot, 13 points behind leaders Manchester United.

“I think he is improving every day – he is such a young player,” said Villas-Boas. “He is one of our major assets.

“The team changes so much from one year to another and as he keeps learning he will feel even better and probably his performances will improve.”

Villas-Boas said Defoe’s goal, his 10th in the league this season, was especially significant for Spurs after Villa had been on the receiving end of an 8-0 battering at Chelsea on Sunday.

“It was important to get that goal because we knew emotionally it could … make Villa unstable in some way,” he explained.

Villa manager Paul Lambert said his 16th-placed side were fortunate to go into halftime at 0-0.

“We rode our luck massively in the first half because Spurs were very good,” said Lambert who was confident his squad would recover from their two heavy defeats.

“They will be fine,” he said. “Whether we win, lose or draw … we always try to treat them the same way and try to keep their spirits the same.

“One thing in football is that you can’t dwell on it and you have to bounce back. There is no other way.”

PHUKET: Manchester United trailed three times before a last-gasp goal from Javier Hernandez sealed a rip-roaring 4-3 victory over Newcastle United that opened a seven-point lead at the top of the Premier League last night.

Manchester City were undone by former winger Adam Johnson as he scored the only goal in a 1-0 win for Sunderland which left the champions second in the table, four points ahead of Chelsea who beat Norwich City 1-0 thanks to a 20-metre strike from Juan Mata.

Tottenham Hotspur moved up to fourth after Gareth Bale grabbed his first Premier League hat-trick in a 4-0 rout at Aston Villa who were also thrashed 8-0 at Chelsea on Sunday.

As they have done so many times this season Manchester United fell behind early on but even without the injured Wayne Rooney they offered another dazzling display of firepower.

James Perch delighted the Newcastle fans with a fourth-minute opener at Old Trafford.

Jonny Evans levelled in the 25th minute before the Manchester United defender put through his own net four minutes later as the visitors went back in front in controversial fashion.

Patrice Evra equalised for the home team but Papiss Cisse then gave Newcastle a 3-2 lead. Robin van Persie hit back for Manchester United before Mexico striker Hernandez, in for the injured Rooney, popped up with the last-minute winner.

Manchester United’s 19 league matches this season have yielded a total of 76 goals and their mantra appears to be ‘however many you score, we will score more’.

Had they not steamed back to win a thrilling Boxing Day fixture, arguments over Evans’s own goal would have raged.

Referee Mike Dean initially disallowed it, ruling that Newcastle striker Cisse was offside, but he changed his mind after a lengthy delay during which he consulted his assistant.

“I thought it was a bad decision for the own goal,” said Manchester United manager Alex Ferguson who vented his fury at Dean at halftime.

“Cisse was offside and he also grabbed Evans on the arm. If that’s not interference, what is interference?”, Ferguson told the BBC.

Manchester United had to do without Rooney after he was hurt in training.

“Rooney has injured a ligament at the back of his knee and will be out for two or three weeks,” Ferguson said. “We are running out of ammunition.”

Before his part in the controversy Evans had equalised for Manchester United but the defensive frailties that have plagued Ferguson’s team this season meant they needed to play catch-up twice more.

The third goal by Cisse, the 28th conceded by United in the league, raised hopes of Newcastle’s first league win at Old Trafford since 1972.

Van Persie equalised for the home team with his 13th league goal of the season before Hernandez produced his grandstand finish to give United their eighth victory this season in a game where they previously trailed.

Manchester City’s defeat at Sunderland was their second in a row at the Stadium of Light.

“It’s the same story for us at Sunderland every year, we are not going to come here next season,” said manager Roberto Mancini with his tongue firmly in his cheek.

“It’s important that our strikers start scoring more goals, sometimes we take one touch too many.”

With the season at the halfway point Manchester United, who have already racked up 48 goals to compensate for some unusually leaky defending, have 46 points with Manchester City on 39.

Third-placed Chelsea, who have a game in hand, are on 35.

In the race for fourth position, Everton briefly nudged ahead on 33 points with a 2-1 win over struggling Wigan Athletic at Goodison Park where home defender Phil Neville made his 500th league appearance.

Tottenham replied in a later kickoff, piling on the Christmas gloom for Villa.

Sixth-placed West Bromwich Albion joined Everton and Tottenham on 33 points with a 2-1 victory at Queens Park Rangers in a match delayed after the bus carrying the visiting team arrived late.

Jonathan Walters scored twice as Stoke City moved up to eighth with a 3-1 home victory over Liverpool in the late match despite Steven Gerrard scoring for the visitors from the penalty spot after one minute.

Harry Redknapp’s Queens Park Rangers dropped back to the bottom of the table with only 10 points, Reading jumping above them on goal difference with a 0-0 draw at home to Swansea City.

Fulham drew 1-1 with Southampton who remain just above the bottom three.

Chelsea followed up their destruction of Villa with a gritty victory at Norwich.

“(Norwich) have won against Manchester United and Arsenal this season. It was tough but I was really pleased with the performance of the players,” said Chelsea manager Rafa Benitez.

“The team are showing character. I am really pleased with the workrate and the style of play.”