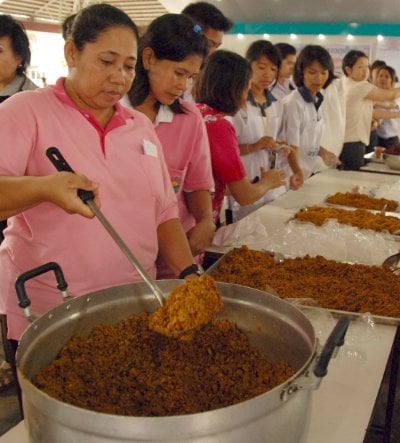 PHUKET: The cafeteria at Phuket Vocational College in Phuket Town has been dedicated to cooking at least 12,000 meals a day to be delivered to flood victims in Bangkok.

“The Ministry of Interior has asked all provinces with the potential to help to provide assistance to flood victims in Bangkok,” said Phuket Vice Governor Somkiet Sangkhaosutthirak.

“Phuket has been assigned to distribute food to flood victims in the Klong Samwa district,” he added.

The district has a population of 164,000 living in 97,000 households, and has 18 flood refuge centers, said the vice governor, adding that the Phuket Provincial Administration Organization (OrBorJor) has dedicated five million baht to buy ingredients.

Also dedicated to help feed the people of Klong Samwa are The Legacy Golf Club and the Panya Indra Golf Club, he added.

The meals will be flown from Phuket to Suvarnabhumi Airport by Thai Airways. Lunches will take off at 7am and dinners will depart Phuket at 11am.

Pork is off the menu. “We don’t include pork because most of the people [living in the Klong Samwa district] are Muslims.” she added.

Ms Nuchaporn called on the people of Phuket for donations of time, effort and ingredients.

“We work all day, all night on four six-hour shifts, so we still need volunteers for this and we need ingredients such as eggs, garlic, red onions, seasoning and rice – because we use 36 20-kilogram packs of rice a day,” she said.

Phuket not alone in problem of abandoned babies

No “nipple gangs’ in Phuket: Police