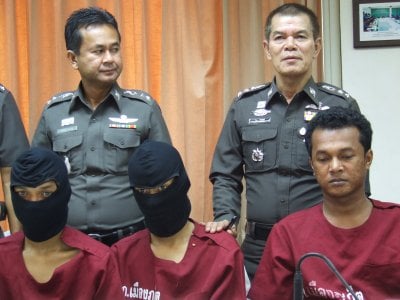 PHUKET: Police arrested two minors and a 26-year-old man in Phuket on March 25 for kicking an Italian tourist off his motorcycle and stealing his cell phone, credit cards, licenses and 1,500 baht in cash.

Ferdinando Rota, 50, was heading down Pracha Uthit Road towards Thepkrasattri Road around 2am when four Thais on two bikes passed him in the other direction.

They turned around and caught up with Mr Rota.

Around 200 meters past the Juvenile Court, Pongpan ‘Pong’ Bamrungpon kicked Mr Rota off his bike.

The Italian tried to run away, but the gang chased him and attacked, robbing him of his possessions.

Mr Pongpan and the two minors, a 17-year-old and a 16-year-old, confessed to the crime.

Police are still seeking the fourth member of the gang, a 17-year-old who remains in hiding.