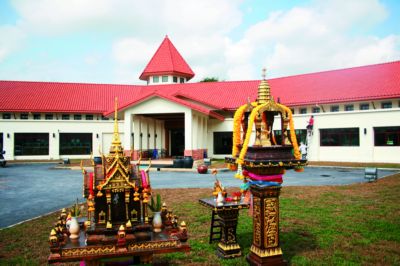 PHUKET: After 17 years in Phuket, the last 13 of them in Phuket Town, the Phuket Gazette moves to Koh Kaew on Wednesday.

Located just off the west side (northbound lanes) of Thepkrasattri Rd, the new office complex is roughly midway between the Bypass Rd and the Heroines’ Monument.

If traveling north, take a left turn immediately after the large Isuzu showroom. We’re about 120 meters down that (unmarked and seemingly anonymous) rural road, on the right-hand side. Look for buffalo (yes) just before the bridges into Gazette Square. For those who don’t know the area, click here for a map.

The office was designed by the late Tucker Bishop, an internationally acclaimed American architect and former Phuket resident. His earlier work on the island included major projects: Phuket Pavilions, the Movenpick Residences and Jumeirah Private Island.

For the Gazette, Mr Bishop had a brief to create the rustic feel of an old newspaper or telegraph office in the western, ‘Big Sky’ state of Montana, says the newspaper’s founder, John Magee.

“We wanted wooden floors, an open plan, old hanging lamps with green shades, lots of wood and the ‘Big Sky’ feel of a very high roof. That’s pretty much what we’ve now got.”

With 1,100 square meters under soaring trusses, beams, ducts, cables and roof tiles peaking at nine meters above the facility’s 61 work spaces, four kitchens, PGTV studios and a 12-seat management/guest dining room, there is indeed a feeling of Montana spaciousness.

But purpose built for the Gazette, there is also modernity and functionality, with the flow of work spaces and equipment reflecting the production sequence of the newspaper.

The complex is situated on rougly 3 rai of land acquired for investment purposes in 2004. Surrounded by buffalo pasture, the facility provides parking for 32 cars, spacious gardens, and a covered outdoor canteen with kitchenette for the company’s staff.

Phase Two of the project will see the addition of a branded, two-story Thai restaurant.

Gazette Square was created to accommodate not only major expansion of the company’s newspaper, web and television businesses, but also Phuket representative offices for The Nation, the Nation Channel, ThaiVisa, and the Asia News Network (ANN).

“Come visit us and let us take you on a tour of Phuket history – at least as far back as we know it as a newspaper. Our walls are lined with the images of people and places you know, dating back to 1993,” says Magee.

Postal Address (not for navigation):