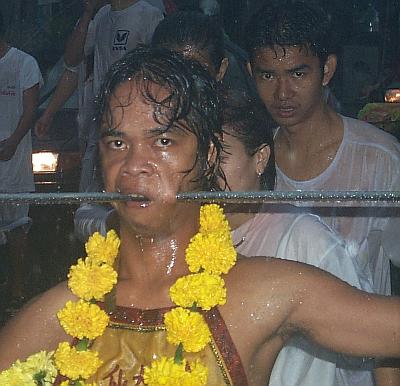 PHUKET: Torrential rain throughout the morning left houses on the island knee-deep in floodwater, blocked major roads, caused landslides and turned much of Phuket Town into a giant traffic jam. Metha Mekarat, Chief of the Phuket Office of Disaster Prevention and Mitigation (ODPM), told the Gazette that he had received reports that 18 bungalows on low-lying land in Soi Tanod, Karon, were flooded halfway to their roofs, and Karon Municipality had moved families out to dry accommodation. There was minor subsidence of land under two houses in Moo Baan Good View in Tung Tong after a dike broke. There were many calls to emergency service from the Pa Khlok area of Thalang after heavy flooding there, and the road up to To Sae Hill in Phuket Town was blocked by a landslide. Roads were turned into lakes in Moo Baan Kuku, next to the Tambon office, and in Sapam near Baan Sapam School. “The reason for much of the flooding today was garbage or leaves clogging drains. We sent staff to help local people clear the drains in the more heavily-affected areas,” K. Metha added. Officials distributed sandbags to people whose homes or shops were in danger of inundation. K. Metha also went on radio to warn people that, according to government meteorologists, more heavy rain can be expected tonight and tomorrow. Thalang District Officer Kanthee Silapa told the Gazette that many parts of the district and several stretches of the airport road had been flooded. “The water level [in some places] is about 50 centimeters deep,” he said. “I know of at least 10 houses that were flooded but there are probably more because I still don’t have reports from everywhere.” One bright spot was Patong, where there was very little flooding compared with previous years, thanks to a new drainage system installed over the past two years. Samart Likhitwattananukul, Deputy Chief of the ODPM in Patong, told the Gazette, “We had some traffic jams in some areas, but it’s not nearly as bad as before.” K. Metha said that another reason for the severe traffic jams in Phuket Town was this morning’s Jui Tui Shrine parade, the largest parade of the Vegetarian Festival, which was joined by thousands of soggy celebrants. Wiwat Intaranich, Chief of the Weather Forecast Group at the Southwestern Regional Meteorological Center, said that the heavy rain this morning blanketed an area stretching from Satun to Phang Nga and east to Krabi, but added that Phuket was the only province so far that had reported flooding. “It’s caused by an intertropical convergence zone – a monsoon trough that’s covering the entire west coast of southern Thailand,” K. Wiwat explained. Between 7 am and 1 pm there were about 170 millimeters of rain in the Phuket Town area and about 70 at the airport.