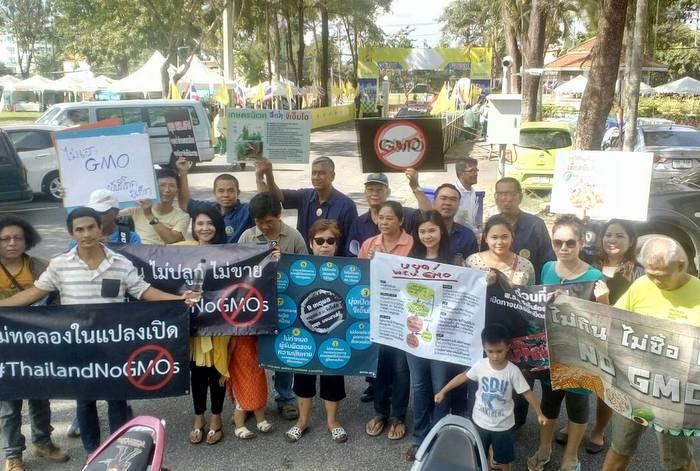 PHUKET: More than 30 members of the Phuket Farmer Association submitted a letter at Phuket Provincial Hall asking that Prime Minister Gen Prayut Chan-o-cha suspend the Biological Safety Bill until it is properly amended.

The bill is set to allow genetically modified organisms (GMOs) to damage the nation’s ecology, with farmers being the ones to suffer the most, Somchai Ratanasuesakul, a law lecturer at the University of the Thai Chamber of Commerce, told The Nation earlier this week.

Dr Somchai cautioned that the bill, if put into effect, would cause incorrigible ecological damage and severely harm agriculture.

“This draft was approved by the Cabinet on November 24. We do not want to see it move further without necessary amendments,” said Somchai Yeesan, who led the protest in Phuket on Wednesday. “It will seriously impact the agricultural system in Thailand. Our food, the lives of our farmers and our exports are all at stake.”

The letter addressed to PM Prayut, and accepted by Phuket Vice Governor Chokdee Amornwat, asked for a committee, including farmers and GMO experts, to be formed.

The letter also requested assistance from official bodies, such as the Office of the National Economic and Social Development Board and the Ministry of Commerce. It said that these bodies should be involved in making suggestions to small local farmers on what they could do to compete with the anticipated market changes due to the bill.

Finally, the letter asked that necessary amendments be made to ensure that the bill does not affect consumer health or small agricultural businesses.

“We need to fully understand how this will impact local farmers who are unable to manage GMO crops. GMO products grow faster, stronger and bigger than organic ones. Without a doubt, it will put a lot of market pressure on organic farmers,” Mr Somchai said.

The protest in Phuket was part of a nationwide movement that saw GMO opponents rally at 47 key locations in Thailand, with more than 500 gathering at Government House in Bangkok (story here).